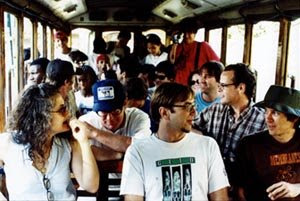 Two posts in two days, my life must be a fucking bore, that's what antibiotics do to you, they keep you out of the bar, so today we'll discuss the band Lambchop. Unless you live in Europe you probably have no idea who this band is so let me tell ya. They are led by Kurt Wagner and consist of anywhere from 5 to 12 people at any given moment, Kurt spent most of his life re-finishing floors while trying unsuccessfully to have kids, a fact that came to light in a heartbreaking interview he did with MOJO or some other brit rag, but what Kurt does do well is make some of the best blue-eyed country soul funk you'll ever hear, it's a bit accepted that the album Nixon is their masterpiece and while you'll get no argument from me i might recommend looking to Nixon's pre-cursor, What Another Man Spills, it laid the groundwork for Nixon and is a damn fine album to sit around on Sunday morning with some toast, coffee, cigs and nothing to do, yet i must also toss in a recommendation for Is A Woman, the album is mostly Tony Crow on piano and Kurt on vocals and is a monument of understated beauty, in fact when i first heard it i didn't much like it but then i sat in bed staring at my feet and played it again and soon it became a late night come-down favorite, it conveys a world of emotion without all the yelling and screaming of most so-called musicians, it's a tribute to living much like Nixon and What Another Man Spills. When you bust your ass re-finishing floors for a living it must give you time to think and ponder amid all the racket, it's a job Kurt said he needed to get out of due to the arthritis in his knees and luckily the good people of Europe found him and allowed him to make enough money that he could quit his day job and make music. So i give you the holy trinity of Lambchop albums, What Another Man Spills-Nixon-Is A Woman, enjoy.
Dreamt by Kono at 5:08 PM

hey I've heard of lambchop and I don't live in europe.

i didn't mean to neglect the Aussie's Nurse, you help 'em pay the bills too, what i think i meant was that Europeans and Australians have much better taste in art and music than us merkins.

as also evidenced by jeff buckley's enormous fan base in australia and france.

do you by any chance like The Handsome Family?

take the merkin of, I'm sure you'll look delightful without it :-)