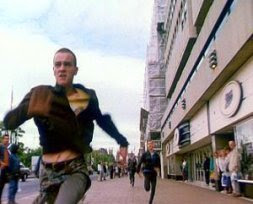 It's very easy to ignore the fact that this is the only trudge through the world that you're going to get, it's easy to get caught up in a meaningless job in pursuit of meaningless things, chasing possesions, consuming for the sake of consumption... it's easy to get caught up in "the future" when the only future that can be certain is whatever happens to be in your line of vision at the moment, you ain't gonna change the world but you can make it more palatable for those in your direct vicinity, you see lately Mr. Death and i have been getting up close and personal and let me tell you he is a motherfucker, no fun at all really... and i decided that no more will i fucking worry about a flat tire or a broken dishwasher or a job pushing paper, the only thing i'm really worried about any more is enjoying each fucking day, from sunrise to pillow talk, cuz the Reaper Man don't fuck around, yeah he looks like he may throw a good party and even have some killer dope connections but i've yet to hear from the other side that it's any better than this side and that's not to say it ain't a fucking riot but until i get some concrete proof i'm gonna enjoy the side i'm on... i had a candy bar today and it was fucking good, i took a catnap and it was fucking good, i walked through the 17 degree air and loved every second of it, i watched the imaginary boy tell his dying grandmother "i love you Gee-gee", a name he started calling her out of the blue and my eyes welled with tears and she actually looked happy as she lay there waiting for the cancer to run it's course, barely able to speak or move, she smiled and fuck man i don't know many people who that wouldn't move, i know i looked at him and thought i just might be the luckiest fucking low-life on the planet, i know i didn't care that i was late for work so the girl and the imaginary boy could spend some last coherent moments with Gee-gee... and i drove through the Pennsylvania hills blaring My Morning Jacket and for all the shit going down i was the happiest man alive, so i wanted to remind yinz, fucking remember what counts and try not to get caught up in the mundane bullshit that in the end means nothing, remember to laugh and drink and screw and i'm not trying to sound like fucking Henry Rollins or some shit but damn it's good to be alive, call your mom and dad and tell 'em you love them, read books, watch movies, watch it snow, listen to the waves crash on the shore and savor each fucking second, cuz at some point that wish of tommorow isn't gonna be there, and you may think i wear my influences of my sleeve, one week Celine, the next week Henry Miller and you'd be right i do but most of this shit is just me working out this glorious nightmare called living and being happy that Kono just is, so now i'm gonna go enjoy my front porch and the cold night, a cup of coffee and special hand rolled cigarette, listen to some tunes and read some more books cuz like Mark Renton, i'm choosing life motherfuckers, aint it grand.
Dreamt by Kono at 4:42 PM

No, Tony! You can't fuck the future. The future fucks you!

what the fuck are you two on about?

Well, that and 'Saturday Night Fever'.

Wow. Sorry to hear the sadness, but happy to be reminded of the good.

How's things for the she-males this year?