Slackin - A life in Replacements songs 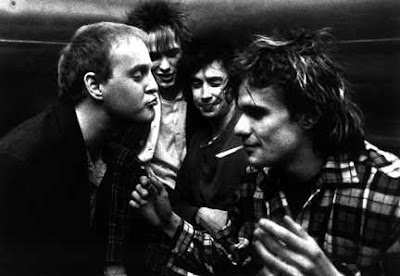 It was the spring of 1987 and i was wandering around a store called Record Revolution in the strip part of Parmatown mall, about the closest you'd get to a hip record store in the burbs, having recently decided that though punk and hardcore was fun there was a definite lack of girls in the scene and those that were in it could probably kick my ass, i had begun to shift my taste in hipness to other areas, that all encompassing genre of "alternative" as they say, i was the kid who stayed up late to watch 120 Minutes so i could be fucking cool and hopefully someday meet a girl who loved the Smiths as much as i did, in fact it was around this time i saw a half Asian girl at a community carnival wearing a Queen is Dead T-shirt and though i never actually spoke to her due to her cold and aloof demeanor, i did follow her around for close to two hours hoping that somehow she would acknowledge my existence, she didn't, and that's really the end of the story, except that's not the story the story is about me and my floppy hair and some spendable cash which led me to engage the record guy in a conversation about this band with a new album called Pleased to Meet Me, a band known as the Replacements, the two of you who've perused the lounge (Gulfboot that's you) for awhile know that this isn't my first post about the Mats and it was on this fateful day that i purchased said album on cassette, popped it in the walkman and walked home and though i freely admit i didn't get it at first, these songs grew on me and a couple weeks later after cashing my check from working as a stock boy in a Thom McCann shoe store, where the asst. manager with feathered hair told me about all the pussy he got being the top shoe salesman as he attempted to sway me into a life of retail shoe selling, i went back to the store and picked up Let It Be and Tim and before you know it i was convinced that it was okay to be a loser and a fuck up as long as you were sincere and sorta tried hard, Paul Westerberg was the patron saint of falling just short and for us white kids in the suburbs who had this feeling that our teachers and preachers and parents were selling us a line of shit he was a hero of sorts and the rest of the boys in the band his accomplices, the reason we cut class to get stoned and drunk behind the Gold Circle at ten in the morning, so here for no other reason than i gotta shit job and to much time on my hands is my life as told by the Replacements.... if your name is Gulfboot or i really like you i might even mail you this K-Tel Gold double disc set... we start at age 17, what i turned the year i first heard them...
17- Shiftless When Idle
18- Dope Smokin Moron
19- Kiss Me on the Bus
20- Color Me Impressed
21- Beer for Breakfast
22- Androgynous
23- Bastards of Young
24- Hold My Life
25- Left of the Dial
26- Favorite Thing
27- Here Comes a Regular
28- I Don't Know
29- Swingin Party
30- I'll Be You
31- Achin To Be
32- Unsatisfied
33- Never Mind
34- Waitress in the Sky
35- Nightclub Jitters
36- Skyway
37- Sadly Beautiful
38- Little Mascara
39- Can't Hardly Wait
maybe not the band's greatest hits but then again they never had a hit
Dreamt by Kono at 5:42 PM

i always thought these lyrics were written for me....

She opens her mouth to speak and
What comes out's a mystery
Thought about, not understood
She's achin' to be...

need to give them a listen. just from the playlist, i suspect it could provide great insight into the mind of my 21 year old boy...

twin - you have stellar taste in music and i always thought these lyrics were written for me...

all i wanna do is drink beer for breakfast/ all i wanna eat is these bbq chips...

Paul did a solo show in Cleveland a few years back and i almost drove back to my hometown to see it and then for some reason didn't, ends up for the encore he invites the whole place up on stage, (smaller venue) passes out bottles of wine and procedes to play Replacement tunes on an acoustic guitar for an hour, i might have broke down and cried when i found out and most likely would've cried had i been there, drinking wine and hearing Here Comes a Regular, fuck me...

Daisy- i'll burn you a copy and send it to you if you want.

and as an added bonus i may post on why some songs were chosen for certain years, then again i am a lazy fucker.

What about Dyslexic Heart? That one gets me up and boppin'