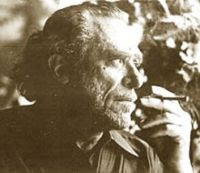 *for the Limey and the Chef
I don't know what day March 9, 1994 fell on and really it's not important cuz it was March 10, 1994 when i heard the news, slogging through the cool sun of spring in Clarion, Pa collecting reference letters for what would become my ill-fated stint in graduate school, i walked from office to office sucking ass, asking if my esteemed professors remembered me, most didn't, and i did the usual grovelling for a form letter they all had saved but the esteemed profs. made you feel as if you had just asked for a kidney, seems the tenured could barely give their research a break to adjust the name and hit print on their pcs...
i was young and stupid then and years later as i thought about it i had a mind to drive back up to Clarion and beat the shit out of a number profs, those who wasted my time in class and those who made me grovel but luckily i usually stayed drunk in the city and/or stoned in my apartment, i was walking back through campus staring at the pretty little co-eds, dreaming of my dissertation on one Henry Charles Bukowksi, i was even elaborating on the subject to the Swindler as she would be later known as we trekked back towards the Sugar Shack, it was there upon entering that the esteemed Doc asked me to sit down, i puzzled asked why, he just looked solemn and said i think you need to sit down, i laughed and said nobody knows where i'm at so it couldn't be my family so what could it be? he just looked at me and said Charles Bukowski died last night. I stood dumbfounded and being 23ish Hank was the man who had gotten me through the disintegration of my family, a few failed relationships, the roominghouses and run down apartments that i had been occupying for the last few years, been a bit of spiritual guide as he is apt to do for many 23 year old wannabe poet types... i looked up eyes already misty and said "Jim, Scotch and water."
I remember being a bit numb as i walked down the street, people said hello to me and i think i just grunted, head down and eyes watering and walked to the bar, the only open bar at half past ten in the podunk town of Clarion, The Capt. Loomis, the classy bar if you could call it that, the bartender was hunched in the corner talking with her friend, both were of the classic rock big hair variety and neither could comprehend what this flannel wearing, dirty jeaned, half dreaded hair maniac was doing sitting in the bar by himself and downing scotch and water's as fast as he could, practically openly weeping as he did it muttering incomprehensible babble, the scotch was Dewar's cuz that was all i could afford and the count reached about 7 or 8 in about an hour, i then proceeded to the Six Pack Shoppe where i bought a couple 40's of Olde English and returned to the Sugar Shack to weep properly.
If you can imagine a six foot four inch, bearded, hairy ape sitting at a small green kitchen table drinking malt liquor and crying uncontrollably you have a pretty good idea of what i looked like, it was a friday now i believe and the usual hustle and bustle and plan making of a friday night were taking place while i sat and lamented the death of my hero, so drunk i could barely stand, i finished my bottles and someone brought me another one and it seemed people kept handing me beers, more likely for the entertainment value i provided than any deep seated sympathy they may have had, the Bell just kept checking on me, looking worried but i told her the world was a horrible place and she should just go on about her business cuz i knew this and i'd be fine but i needed to grieve for the best friend i had never met...
Sometime around sundown i began to fall off the kitchen chair and the Bell lead me upstairs and put me in bed but not before promising to get me when the news came on so i could hear the report, it was dark when she got me and it was Kurt fucking Loder of all people on MTV, i watched solemnly as they displayed the picture from Tales of Ordinary Madness published by City Lights (pictured above), still drunk i began to cry again and she lead back to bed where i passed out. I woke up with no hangover.
Years later i would sit in my car tears streaming down my face after watching a documentary at the Harris Theatre on Bukowski. We all have to kill our fathers sometime and on that day i killed one of mine. But that's another story.

A real life meet and greet with Mr. Bukowski............ my friend with a charming mid-Englands accent was finishing up a late night early morning San Pedro foray in the early 80's. As he stumbled home still fueled by the Devil's Dandruff, he crossed paths with his hero.

Not quick enough to hold his tongue he blurted out "Mr.Bukowski!...... I've always admired you!" He felt awful and even more so as the hulking form of his hero turned to him and asked in the gravelly signature..... "Do you know what you can do?........... Buy my books!!"

when i was young and stupid i always wanted to meet my heroes, now that i'm older Gaz i realize it's best to just let them be, i would've probably sounded much like your friend or worse tried to pick a fight with him when my silly little expectations were shattered, it's better to let them exist in the perfect little fantasyland that is my head, thanks for stopping by the Lounge by the way.