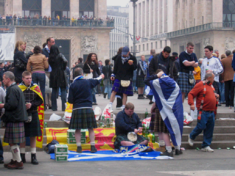 Come Wednesday the Tartan Army will travel to La France', top of the group the Frogs, and here's hoping the boys show the same grit and determination the did last year at Hampden, stay organized, frustrate the Frogs, (who'll be playing without Thierry Henry) and nick a goal towards the end, big task for the boys but i believe they can do it and dare i say go top of the group. A draw would do well but we need to keep an eye on those sneaky eye-ties sitting back and waiting, would've been nice if the Frogs had played a bit and beat the greaseballs but we'll just have to take things into our own hands, i'm touting James McFadden to get the winner, seems every time i turn on the telly he's scoring a blinder, so i wait for the Frogs, like an stupid Merkin i'll boycott french fries till after the match and come Wednesday i'll don my kit and head out into the streets pulling for the boys, maybe even play some Big Country on the way to work... i've never seen you look like this without a reason/ another promise blah blah passes by you/ in a big country dreams stay with you/ like a lover's voice cross the mountainside/ stay alive... cue the fooking bagpipes.

Saw some punk rock kid wearing a kilt down to his fucking ankles and almost jumped out of the car to beat the shit out of him, maybe i'm acting like some plastic jock as they say, but here in the land of generic you gotta hang on to something, wanted to clue the boy in that if you're gonna wear a kilt wear it properly, it's not some fucking dress you wannabe Sid Vicious, i shoulda stole his eyeliner and scribbled asshat across his forehead for being such a jackass, lucky for the twig i'm trying to practice non-violence these days... but show some RESPEK son.