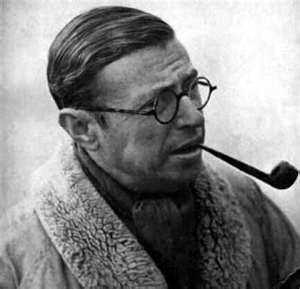 Sartre's teeth were brown, he was French and he smoked what do you expect, and he gets points for bedding Simone B. , of course he did write that play and of course after bouncing around the interweb today it occurred to me, my own private hell could be summed up in two words: poetry reading, see i tend to go from link to link and see if there's ever anything decent out there and today i stumbled upon the old spoken word, fucking christ, you know i once did a reading or two when i was a young man and i can now sit here and tell you that i was a fucking wanker, full on, there is no other way to describe it, the state of modern poetry is this, all the really good ones learn to play guitar and sing, the rest write the same stale verse in the same stale style and speak in the same stale tones, oh they all think they're different but all one has to do is watch and it's like a never ending nightmare, as if Poet 1 left a fat, stinking turd in the toilet and then Poet 2 sauntered in and decided to do the same, repeat the process ad nauseum until the bowl is filled and it's overflowing onto the floor, fucking Hank was right, when it comes to the poesy don't try, he was the last original and even he got a bit dull towards the end, in fact the last good poet i heard read was Jim Daniels, a prof at CMU, i was fucked on scotch and weed and beer and running with an ex-ironworker who drank to much and could beat the shit out of anyone i knew, Daniels wrote about Detroit and the factories and getting your girlfriend pregnant all in a working class style that was reminiscent of Hank but not derivative, does that make sense? He did not try to be profound like all the half ass poets of the intellectual hipster class, i mean fuck off really, if have to suffer through one more so-called poetry moment of inane profundity i'm gonna insert some deep and meaningful metaphor about flowers or doing laundry here...


Here in our fair little Rust Belt town we have a show on public radio called Prosody and i challenge anyone to get through the whole fucking show, you'll either be asleep or drinking heavily or self flagellating, it is in and of itself a form of Sadomasochism, and don't give me that shit the profound is found in the everyday, cuz you know what? i'd agree, just try and fucking write it that way and quit boring the shit out of me and quit with the mainly monotone delivery with the sporadic inflection and pause so i know i'm getting deep thoughts okay, fuck me, if i seem pissed really i'm not, i'm just tired, it's not as if i hate poems, i don't, i just like it better when the poets are quiet and not around, unless of course i'm having trouble sleeping and laying off the sundry drugs and booze, then bring the 'tone, i'll be asleep in no time...


of course this is a mess cuz i'm fucking sober, i'm guessing with my luck the I-mac or Nick Disaster will one day walk up to me and say i want to be a poet, i wish my own father would have kicked me in the balls when i told him i was writing poesy, but if one of those two get this same lame-brained idea i'll tell them to get a guitar and find a good drummer cuz they hold the whole thing together or better yet i'll tell them to get a shit job, a drinking problem and drug habit cuz at least then the shit will be interesting, i'll advise them to only date women who will fuck them over cuz hey man out of pain comes brilliance right? i'm living fucking proof yeah? oh man i feel a fat, stinking turd coming and now i will unleash it on the world and not flush cuz you know my turd is special and i'll leave it here with all these other special turds, so please don't touch that handle, to flush it all would be to murder all us sensitive souls, so from the depths of my sphincter...


For a 1.99 i'll send you a MP3 of me reading this masterpiece in my best monotone... and maybe some titty pics as well. cheers.
Dreamt by Kono at 5:59 PM

You are a master of metaphor, my friend. No shit.

i'm laughing hard over here tonight, my friend! that is truly some funny shit.

perhaps you could do a specialty. custom turd-oriented poetry for rich people. do readings, along with the performance art of picking the turd-veins out of the shoe cracks with a q-tip.

Hahaha - that was awesome, though.

I'm going to take that fantastic Valentine's Day poem of yours, send it to John Martin and ask him to use it to revive Black Sparrow Press. Well done.

When I lived in Manhattan I used to occasionally visit the Bowery Poetry Club. It was one horrifying night after another. Torture. Did you ever watch that Def Poetry show on Saturday nights? I don't know if it's on anymore. Most awful.

Daisy- that'd be a good gig but i'd have to fist fight Damien Hirst cuz i'd be cuttin' in on his schtick.

Twin- would you like me to shave a message into my chest hair? i'd do that for you ya know. i figured if the girls of the interweb can post provacative pics and up there readership why not me right?

UB- Thank you sir and you might chuckle to know that this post was inspired by watching a couple of po-ETS read at the Bowery Poetry Club, what a fucking trainwreck.

Cheers Kono. Good shit. Sorry about the no job thing. I'm buying the beers at our next meeting.

You serious about that $1.99 stuff? Bargain basement, I think. You got PayPal? I'll take the titty pictures too.

I shuffle my iPod for showertime, and I can just imagine "Size Thirteen" coming on, probably following some Billy Joel (I like good music, but I adore awful music -- blame it on my mom playing the Lite Rock station every day on the drive home from kindergarten), and me collapsing in paroxysm of laughter, probably striking my head on the faucet, leading to either a brilliant life-changing idea or irreparable brain damage. Probably both. And then continuing to giggle as Shakira comes on and the water turns pink.

Ross Man- right now the job is in limbo, should have it the rest of the year but then shit gets grim, i'll take the some free beers though.

JMH- you're the 2nd in line for the titty pics, it's the new way to up readership in blog-land, take off your shirt and then write poorly but every one will fawn all over you cuz you're showing the cans...my showers basically consist of a test of wills between me and my right hand, but i jest, i like to wank before i shower.