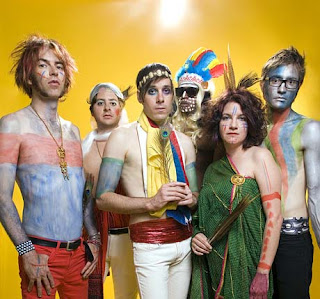 i like this band, i like freaks and cross dressers and people who don't give a shit, in fact i posted a twisted little story on some class reunion site and the girl i took to the prom wrote me a scathing letter about how i was some kind of freak who didn't give a shit, glad i didn't include the tidbit about donning a Ziggy Stardust wig, taking a boatload of drugs, letting some female friends of mine put some incredible over the top make-up on me and then walking the streets of the small town my university was in to the Subway where i calmly ordered a sandwich to the complete befuddlement of the gentleman working there, calmly ate my sandwich in the window while being called "fag" and "freak" and "fucking weirdo", then heading back to some slum lords apartment to down malt liquor and ultimately get fucked by one of my female friends which i dare say was probably a better night than my macho name-callers had, of course being 6'4 helps keep the name callers at arms length cuz the last thing they wanted was to get the shit beat out of them by some drugged-up, freak in an orange wig and make-up, but the point is i really dig this band who's new album comes out on Oct. 23 and who's last two albums were great, particularly if you liked sunny pop music with lyrics about death, drugs, love, existence, drugs, sex, drugs, sex and sex, fuck even Outback Steakhouse picked up one of their catchy tunes for a jingle, definitely a band i'd like to see so come to ze burgh pleaz... and the prom date i would guess probably doesn't listen to this band, in fact she lives in the suburbs, is a bit overweight and the years have not treated her well by any stretch of the means, it seems her family had some weird ritual where the first penis the female accepted was to be the last and only one cuz we all know sex is all about love when you're 17, just ask Bristol Palin.
Dreamt by Kono at 5:57 PM

oh my lord I kept looking for a full stop but the closest you came was a string of ellipses....

what about those that give a shit about not giving a shit...?