Father's Day and the Summer Solstice 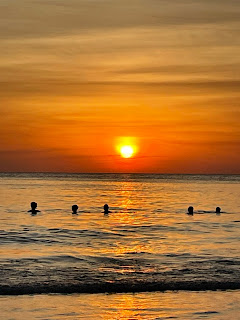 Vacations can be a cruel mistress... on the one hand we go on them to relax and get away and on the other when you have people confined to relatively small spaces and forced to deal with each other for a week or so those people tend to get on each other's nerves, it's a fact and a natural occurrence. Years ago i had read something somewhere which stated as such, that after roughly 48-72 hours of non-stop "togetherness" people begin to want to throttle each other... and so it was that the Kono clan set off on it's annual trek to somewhere that involved water and sand and what seemed like a tenuous balance between a good time and a fucking disaster. There will be no need to bore my dear reader with any sort of in depth play by play of the week that was as a highlight here or there will suffice.

I can honestly admit that after the first 48 hours it seemed like it was going to be an unmitigated shit show. The I-mac in full hormonal rage seemed to have this hair trigger temper which could be set off at the slightest of touches. I fucking love that kid to no end so it pains me to say this... he has a lot of his mama's genes in him to the point that even his mother agreed with me and told him as such. Those genes involved this argumentative streak and the need to explain yourself endlessly, always get the last word, and always be right... even when you're wrong. It's a trait that both her brothers and her father have and for those keeping score i have about as much use for her old man as i do for an asshole on my elbow. Luckily for all of us the boy seemed to settle in and calm the fuck down after the first two days and while there was not some moments of turbulence thereafter (mainly with his little bro who has a doctorate in being able to set his big brother off all while smiling innocently)... and speaking of turbulence allow me to digress...

Air travel these days in the land of repealing rights is basically a crap shoot. Roll the dice and see if you can get to your destination but plan on building in a few extra days cuz you most likely ain't getting there when you should. The way there we got lucky... sorta. As we taxied out to one of Hartsfield's numerous runways the captain came on and explained that there was a bit of an anomaly with the hydraulic system... excuse me? He said he'd try and figure it out but after five minutes of silence where i was contemplating asking if i could just be let out here he got back on and explained we were heading back to the gate as the plane needed to be serviced... i was thrilled. Even more amazing is once we got back they walked us all to the same gate we left from all the while plying us with free water and Rice Crispy treats, Life Savers, chips and we began boarding another plane which frankly amazed me as i figured we'd be sitting in the Atlanta airport for the next few hours.

The way back was a bit different. As i got off the exit at Tampa's airport the BW's phone buzzed alerting us that all our flights had been canceled. Lovely. A half hour earlier and i'd have walked to the front desk of our place and asked for another night, instead we spent the night in Tampa (which was cool) because to get home the same day the airline gave us the brilliant plan of flying from Tampa to Nashville to Dallas to Pittsburgh. What the fuck? was all i could say and so instead of spending 14 hours shuffling through various airports we booked flights at 5am the next morning and were back in the Burgh by 8:15am. Mission accomplished.

So back to the story. Sunday was Father's Day and after a warm and sunny morning the clouds drifted in and in usual Gulf Coast fashion some thunderstorms started rolling in. It's a well documented fact that i have an irrational fear of thunderstorms and while it didn't seem to phase anyone else on this crowded beach it kinda freaked me out. The BW and boyos knowing this and sensing my anxiety asked what i wanted to do... sprint to the room was what i wanted to blurt out but i remained calm and said i was thinking of heading up but they could do what they wanted, the lifeguards having just left at 5pm made me uneasy as there was no real way to know if it was dangerous other than looking back and checking the deck of the hotel pool which would be cleared when bad weather came in. That being said we went back to the room and hung out for a bit until the storms blew through which led to a gorgeous night and so i decided that i would go back out and watch the sun set while lounging in the warm waters of the Gulf of Mexico.

On hearing my plans Nick Disaster said he wanted to come with me and i said that's cool and so we got our swim trunks on and headed down to the beach... to witness one of the most glorious sunsets i've ever had the pleasure of seeing. The storm had kicked up this gorgeous orange and white swirl of clouds with faint streaks of blue thrown in the background, it reminded me of an early Piet Mondrian painting i had seen once when i was playing hooky from work and wandering the Warhol, breathtaking and beautiful i sat and gazed at it while my youngest son talked to me about all sorts of things... it made me smile, he's different than his older brother and while he thought the sky was cool he didn't see the big deal in it and he chatted away as we watched the sun melt into the water. As we stood on the beach and looked towards the fading hues of orange and blue Disaster said, "dad, why do you like that so much?" I told him because it was beautiful. He said i sounded like a girl. I smiled at him and then i explained to him why i loved it so much... i said, "you know how your dad doesn't believe in these gods that are peddled", he shook his head yes and i continued, "well you see i don't believe in that but i believe in the sky, the sand, the water, the moon and stars and so when i look at that sunset i see my father and my uncle and Little Baby Kitty and all the other cats who've gone, my grandparents and friends i've lost, to me that's them. When my uncle was dying, the last conversation i had with him he told me he was fine with death but he was really going to miss the beauty of the world, when i look at that sunset i understand that perfectly." Disaster stood thinking for a moment and then looked up at me with those familiar blue eyes that run through my father's family and said, "i get it." Then we walked up the beach and towards the hotel as he talked about basketball. All was right with the world... at least for those brief moments.

Two days later on the summer solstice i did the same thing again this time with both boyos... once again floating in the Gulf while what i call a traditional Gulf sunset melted away into the horizon, another circle around the sun, though don't let my description fool you, it was fucking beautiful and possibly not a traditional one as the longest day of the year only happens once and while i watched that deep orange-red orb fade i looked at my sons, who of course were starting to bicker because what would light be without dark? it made me laugh as i told them to relax, the I-mac wanting Disaster to be quiet and so i told them both to relax again, told Nick if he wanted to talk to come over by me because i didn't want them fighting. He did and though the I-mac in his way these days wanted to explain why he wanted Disaster to be quiet i said i get it so why don't you just enjoy it now, he's over here with me... and so we all went back to watching it while the BW sat on the beach taking photos, some of which were excellent. It was a gorgeous way to spend my last night on the Gulf, a quick dip under the water so that i could taste the salt on my lips one last time until the next time i find myself in one of these places.

There are these snapshots we take with our mind... often i think when the time comes to go back to whatever we were before we were born, when the DMT is flooding the brain as we prepare to exit this physical body, that these snapshots, these snippets of this thing called life, will go lazily by, not a flash but a feature film of them mainly because at this point time will become meaningless to us as it will no longer exist but stretch out infinitely, where there is no difference between a second and a millenium, sometimes i have an idea of what snapshots i may see, what people and animals and places will be there sending me off, there is something profoundly calming about that to me... as my Uncle said, i'm not worried about dying i'm just going to miss the beauty of the world, of this universe, i hope my Uncle found out that there is nothing to miss because we are it, that instead of looking out at that beauty we become part of it, we're part of it already just in a different form, a form that tends to make us think we are separate from it when we're not... and until that time i'll remember what my father told me and what i tell the boyos.... don't worry about me because i'll be fine, take care of those you love and love them unconditionally... sometimes i forget how fucking lucky i am, lost in a shuffle of modern non-sense, then i have a good laugh at myself and remember it's all just a ride... 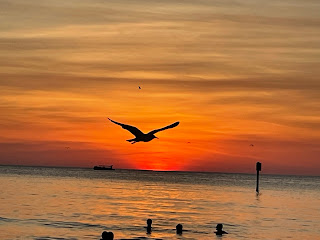 (those three dots in the top on the left side are the boyos and their old man, the bottom one they're joined by a bird.)