Thinking about Pops on what would have been his 78th Birthday

Four years... like a World Cup cycle, that's how long it has been since Pops died. He even left this place in a World Cup year so his futbol loving son could keep track easier. In fact his futbol loving son loved the footie so much that Pops had actually begun to start watching the game the last few years of his life and talked about how much he enjoyed it. I remember explaining the offside rule to him as he sat and listened in his usual intent way. The man was the smartest person i've ever known and that's saying something cuz i know some wicked smart people, The Kid and Gulfboot come to mind first and foremost, and better yet i was lottery lucky because he was my dad and i got to talk to him extensively. It's the one thing i miss most, our conversations.

The boyos and i got to spend his last birthday with him. Along with my sis and her family Pops got to have a lunch with his grandsons and children. I remember watching him, the smile on his face as he looked around the table, he was a man who was happy and at peace, who understood what was coming and wasn't all that worried about it. This was before the The Longest Day, before we knew how final this birthday would be. At first this day used to sting, like a stiff left jab, now i've learned to duck that jab, to smile as it wizzes by my head, there is no sting anymore just a joy that i got to spend the time i did with him. I've written before how my father's illness and death has taught me extensively about living and also how to die... so to honor him i live, to the best of my ability, though i'm sure Pops would say that i was always pretty good at doing that. And so here we are four years later.

Seeing, as like my father, i fully believe that western, organized religion is money making scam, bullshit for lack of a better word, some may find it strange that i often talk to my father during the course of the day. Sometimes it's when i make a red light while humping for the bourgeoisie, i'll glance up and whisper "thanks Pops", time being money in the old gig economy. So while i'm not a religious person in any sense of the word i am not devoid of what one may call spirituality, the two are not one and the same as my way is more the philosophical way, the Buddhist or Dudeist way, so to speak. A connection to the natural world and the fact we are in it and of it. So when i look to the sky it's not to Heaven in the western sense but to the moon and the stars, to the trees and rivers and dirt to which we are all from and to which we will all return... and when i do that i always seem to smile because i know my father is everywhere, not in the sense that i knew in his previous incarnation but he's there. Maybe it's my own version of the Jedi Mind Trick or maybe i've eaten enough mushrooms to understand... who's to decide?

And so on this day i will celebrate Pops, i'll get a chocolate bar (non psychedelic), i'll eat a pastry, i'll get myself a cheeseburger, all things i know my father enjoyed. I'll look at his grandsons, the boyos, and know how thrilled he was with them, how much he loved those boyos. I'll remember what he said in those last months of his life, "don't worry about me, i'll be dead, take care of those boys and be nice to your mother." And i have been and i have done. So Happy Birthday Pops! wherever you or whatever you may be... 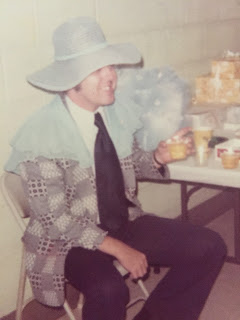