A History of Addiction

I was never going to be an alcoholic. I'm just too fucking lazy. Being a drunk takes work and if there's one thing i'm averse to it's that word. There is a certain amount of discipline and drive when it comes to drinking and i just don't have it. Booze has always been the sidekick to various other substances, the accoutrement to the main course. So while booze has always been invited to the party it was more like that quiet friend who crashes on your couch, you don't really realize they're there but yet there they are.

Now had Tricky Dick Nixon rolled out some fancy add campaign like his boy Dutch Reagan did a few years later maybe this post wouldn't exist and maybe mom and dad would have hid that gas can in the garage so that Junior here wouldn't have discovered just how lovely it smells and how lightheaded it can make you. Hell i was young and didn't realize i was killing brain cells but i quite enjoyed it. Somehow i even realized i should keep the whole gas huffing thing to myself so as not to arouse suspicion or get in trouble. The subconscious works in mysterious ways.

A few years after i learned gas huffing was an interesting hobby i discovered the joys of wanking. One could say i was addicted to it but let's just face the facts about teenage boys... they jerk off.. a lot. There are two types of men in this world, those that claim not to jerk off and those that lie about not jerking off. Then of course came the introduction to the female form and my relentless pursuit of it. In my youth i fooled more than my fair share of parents, mother's being particularly smitten, with my friendly ways and utter mastery at the art of bullshit. I knew what they wanted to hear and while the daddies remained more skeptical of my intentions usually even they were won over eventually. Until of course i cheated on their daughter with her best friend. Those guys always should have gone with their gut i tell you. Now as i got older one could say i was a borderline sex addict but i just prefer to think i liked to fuck a lot. Now of course i realize that one of the largest obstacles any male faces in their lives is the ability to overcome their own penis. For the most part they never do, sometimes i think i've made great strides in that area and other times not so much. But alas aren't we all works in progress?

Then of course there were the very brief and short dalliances with pcp and then the unfortunate knowledge of learning how to rock up your own coke but those were short stints though i'm sure my body would have preferred no stints at all. The dust was more like a crash course to see how much i could scramble my brain and there is a whole post from years back to devoted to smoking rock and wanking so there's no need to delve too deep here. My old friend the Engineer once remarked at how i seemed to have this innate ability to quit shit before it got out of hand. He was wrong of course and while i did give that impression usually it was a moment of clarity in a drug addled and drunken haze that made me realize it was time to kick shit. When the impending doom crept in the dust was done and that little episode of thinking the ticker was about to burst at good old Hippy Jack's made me quickly forget the recipe for homemade rock.

Now one might think that would be last time i'd ever see that fine white powder again but alas sometimes the universe looks you squarely in the eye and kicks you firmly in the nuts. Let's just say that shortly after making things legal with the old Breadwinner things went pear-shaped quick fast. In order to ease the mental anguish, pain, what have you, i was hanging at the lowest place i could find, a mini-mart that sold beer ( a rarity in Pennsyltucky in those days), it was home to the halfway house crowd, a veritable island of misfit toys all drinking 75 cent cans of malt liquor while staring at a shitty little telly usually turned to the local news. One could often smell the familiar scent of crack wafting from the bathroom and one fine day i met a lad who just so happened to have the skyline of Pittsburgh tattooed across his belly. Somehow the talk turned to powder and pills and weed and since i was feeling like a mutt that had been kicked in the face, when he told me his cousin got some decent blow i placed an order. That slope wasn't just slick it was treacherous. When one is examining how fucked their life has become, has a suitcase full of money and access to blow, things usually don't turn out so well. Of course it always starts so innocent but before i knew it i had Cousin Franco on speed dial with a damn near standing order for an 8-ball every Friday night. There were points where i couldn't hit the bar for a few pints on a Tuesday without hitting him up for a gram. Needless to say a few years later and i had managed to piss away a healthy chunk of illicit cash, the one time genius weed dealer of North Oakland was now nothing more than a pathetic coke head who people would do anything to not be cornered by in the pub so he could spill his tales of woe in a splattering of verbal diarrhea between trips to the can to key up in the stall. And yet one day i said that's it and never touched it again.

But alas our hero was not out of the woods yet, there were other things to find and find them he did. In the years that Big Pharma was pushing it's pain relief one could very easily find those little sweeties in every local bar. Seems there was no end to people being prescribed opiates and soon people realized they had more than they needed or could get so many they could turn a nice little profit. Soon the little pills of all shapes and sizes, percs and vikes and oxys, were easily and readily available and usually in bulk. There is a few years of the lounge that were written under the lovely haze of opiates and coffee. The routine usually involved downing a pill and then walking to the coffee shop a few blocks away, scoring a concoction of steamed milk to help with the stomach and then walking back while the pill kicked in. The walk would stimulate the mind and kick in the drugs so i could come in and sit quietly at the typer and twiddle away. Luckily for me i had a rather strange respect for the opium poppy and understood it's power, much more than i had for those coca leaves, and so i'd use the reduction method ala Bill Burroughs to attempt to periodically take breaks which usually resulted in a finale of a rather sleepless night while dealing with a slight to mild case of the creepy crawlies/ heebie-jeebies. When the connections finally started to dry up with the "get tough on addicts" and prosecution of docs writing too many scripts there was one final reduction method and a ride off into the sunset.

The addictive personality will always find something though and i think the trick is to find something that may be a bit less harmful and so as the Big World Bank Machine was set to close i decided i wanted to get into some kind of shape, to be able to chase the boyos and not be the daddio in the park panting on the park bench. And so the workouts started, of course i overdid  it to the point i ended  up with back spasms down the road. My ability to push and torture myself being both the proverbial blessing and curse. I've gone through various forms of physical fitness regimens but have since settled on swimming, something that is excellent for the back and the creaky knees and ankles of an ex-hooper/warehouse grunt. Add to the mix my new found love of smoothies and at least these days i'm addicted to something that isn't supposed to kill me until of course one reads the statistics of how many people kick it while working out. I don't much worry about it, having gone full organic between the herb and the fungus i've discovered a discipline i never really realized i had. Having kicked all the nasty shit i'm now hooked on raw fucking oats and flax seed, bananas and berries and Greek fucking yogurt. I've gone full Mark Renton and have chosen life or something like it. Being addicted to reading and having gone down the rabbit hole of some half-assed Eastern mysticism mixed with my own off-kilter philosophical musings i sit here today laughing like the Buddha of suburbia understanding the present informs the past much more than vice-versa. Now it's time to change the laundry. 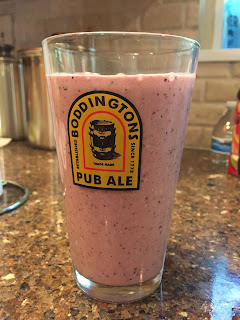 Honestly it’s a wonder you’re alive, but I’m glad you are and glad you found swimming and smoothies. Did I ever tell you my sister lives in (the burbs of) the Burgh? I visited a few months back, liked it. Sadly the dude she moved there for/moved in with didn’t survive the opioid crisis you mention, but that’s a story for another time. Glad you were able to call it quits.

Hello Stranger... sorry to hear about your sister's boyfriend. Sadly i know too many people who are no longer around because of powders and pills, i'm old enough to remember the first time around, the mid 90's when the smack got really good and people were dying left and right, then of course Big Pharma comes along and pretends that they've invented the wonder drug. As i stated i always had a healthy respect that category of gear and even then i walked a very fine line. Most people don't understand what they're getting into with that shit until it's to late. So what happened to the blog? the wedding? Chicago? one day you just disappeared, then again i guess that is the way of the internets...

I know, I pulled up stakes pretty fast there. The men’s rights activists found me and ruined everything. You’d think going dormant for five years would be enough for them to lose interest but damn if they weren’t right there waiting for me when I came back. That shit is pretty brutal, and it was bad enough when it was just me but when they started ripping apart my fiancé/husband, that was the last straw for me and I had to go dark. I mean he never asked to get brought into any of it and it was making me too miserable. Anyway, we’ve been married for 11 months now, and are about to possibly pull the trigger on a cross country move to LA where Simon got a job offer. That’s the short version, but we’re good.