Happy Birthday Pops, wherever you are... 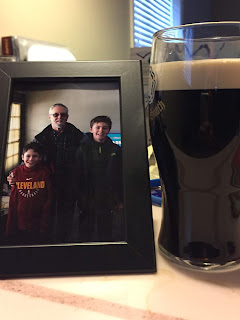 Today my father would have turned 75. As this last year has gone by i realize now more than ever before just how much i miss my father. He was the best friend i've ever had. I miss our long conversations on everything, on politics and religion, on our devotion to our hopeless hometown sports teams, on family and the boyos, on philosophy, on existence and non-existence. There is not a day that goes by where at some point i mutter out loud to the universe, "i love you dad."

It was roughly a year ago at this time when the boyos and i spent a weekend in Cleveland hanging out with Pops and celebrating his birthday. It was the last time the boyos and their grandfather saw each other. A few weeks later came the The Longest Day and though they got to speak to him on the phone they never got to see him again. It wasn't the way i had it planned but the universe doesn't give a shit about human plans, it has it's own and it will carry on with them regardless.

So today i will go about things and as usual my father will never be far from my thoughts. I'll pour a Guinness, two actually, one for me and one for him. I remember him laying in the hospital saying he could go for one more Guinness, a guy who rarely drank but as we know it's always the things we shouldn't have that we crave the most.  I'll drink them both, most likely through a mist in my eyes that he would chuckle at.

The last year has brought about much reading and thinking and in an effort to improve my skills as a parent i've become more patient, learned to listen better, to communicate with the boyos in a way that they'll understand. The same way Pops did with me. I know he enjoyed watching me go from raging maniac to a semi-responsible adult, i know he enjoyed seeing me with the boyos. Call it validation for a job well done on his part though he'd say nothing of the sort. I remember speaking to his special lady friend on the phone the day after he passed, i had never talked to her before and as we spoke she told me that she felt as if she knew the boyos and me because of how often my father talked about us. He loved you all so much she said. I miss that guy.

That's lovely kono. And it's great that your Dad got to see you being as good a dad to your boys and he was to you. ALl the best to you.

75 seems so damn young. my dad made it to 80, which is the same age as my energetic, tiny neighborlady, who just got out of rehab after suffering a bleeding ulcer. 75 still seems damn young to me...

very glad your sons got time with your dad. they will remember him. i just posted about my sadness that my parents didn't live long enough to see my children become parents. they'd be 90 and 95 years old if they'd hung on til now. the darker side of this? i will not live to see my grandchildren breed... three generations. that's about all we're gonna get...

sorry. probably not helpful. i still miss the hell out of my dad and he's been gone over 10 years.

You've very lucky to have had the time you did. Good that you embrace it. Have you ever written about your ma? I only recall ever reading about your pa. Clearly, he was the influence.