Today it has been six months to the day that my father died. It seems like both an eternity and the blink of an eye. To say he has dominated what i've thought and written about in the last six months is an understatement and easily proven by just looking back through this little exercise in futility which i've dubbed "the lounge". Sometimes i wonder if there is an hour in the day that i don't think about my father. I'm sure there are a few that pass where he doesn't cross my mind in some way but those are more the exception than the rule. What i do know is that i miss him and that the last six months has been spent trying to deal with the loss of the person who knew me the best and who, in simple parlance, was my best friend. Then again i'm not sure he was my best friend as he was more than that, he was my dad but to simply call him that would understate the human being he was. He was a fucking gem.

This situation i'm in is not unique and i understand that everyone goes through it at some point. If things go as planned the boyos will one day deal with it and i'm doing my best to leave some kind of blueprint or guide into how to go about it. I'm not sure it's the correct one as i'm easily prone to bouts of silence and brooding away in my own thoughts, though i make sure i talk to them often about their grandfather (and every other topic that comes to mind.) I also know that what i miss the most is our long and meandering conversations that would touch on everything from politics to philosophy to strip clubs to the Cleveland sports teams to his grandsons and his ex-wife, to his only son's not so upstanding past, and to the mistakes and triumphs of this whole living thing. I miss his rational way of thinking and the inflections in his voice when he was railing against the right wing or talking about  or to his grandsons. Mainly i just miss him and that's okay. I'm supposed to. I'm also supposed to get on with things and so i have to the best of my limited ability.

The internet is a vast and useless wasteland used mainly for commerce and influencing elections, (Pops would love that sentence) but every now and then one stumbles across something that somewhat reminds us that the human race is just as capable of great beauty and compassion as it is violence and hate and destruction. And so it was one day while perusing the wasteland that i stumbled upon something written by an elderly man, it was a response to someone young who had just lost a loved one and in it was some of the wisest words i had ever come across. If i had any technical ability i would have copied and pasted or something but fuck all that non-sense as it's difficult enough for me to post a simple blog entry let alone figure all that shit out. Luckily i've read it so many times i about have the damn thing memorized.

This anonymous man wrote about the one-hundred foot waves that will wash over you when you lose someone you love. How in the beginning they come fast and quick and you wonder if you're ever going to make it out or if you're going to drown in the force and strength of the waves but rest assured he says, you'll make it. Of course once you get past high tide it doesn't mean the waves will stop, they'll keep coming and they will have the same effect. In fact they'll always keep coming at you but that will just help to prove how much you have loved and been loved and even as the time passes and you can see the waves coming from far off, you can feel them wash over you just as they did in the beginning, you'll still come up for air, you will still get through it. It may not hurt any less but you will understand how to cope and survive. He wrote of how those waves leave scars and how you should be proud of those scars. How if you are lucky you will have many. How those scars are proof of the love you have had for those in your life. How he, as an old man now, has many scars. How most of his friends and his family are gone and that each day he wears those scars proudly, not to forget them or the ones who he loved and that if we are lucky those waves really never stop as in those waves are a reflection of you and the people you loved the most. I'm sure i don't do the actual letter justice but that's the gist of it.

And so now i deal with those waves. Now i usually see them coming from far off. I've learned how to breathe and not drown as they wash over me. I've learned to wear my scars, i've learned to show them to my sons and to tell them that they too will one day have them and that it will be alright. That it will be a sign that their old man did more than just wander around the house muttering to himself but that he passed on something just like his old man passed on something to him. And if i could find that old man who wrote that letter i'd give him a great big hug and ask him about the waves and his scars. I'd buy him a cup of coffee and sit and listen to those stories, the stories that cause those waves, the stories that leave those scars, cuz in those stories are more than words and memories but that intangible thing we call love. For a guy who grew up in the Rust Belt my father loved the ocean. I tend to think he'd enjoy that letter and also agree with it. I miss Pops. 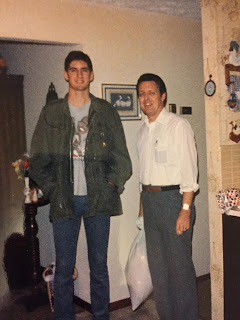 I love that sentence, too. and this whole thing. and you, big brother.

remind me to tell you what Elli said about that picture. ; )

Has it been six months? Dang. Is this going to cast a pall over Thanksgiving?

You're so lucky. I go for long, long stretches without ever thinking of my da. I'm not looking for sympathy. Just an impressive juxtaposition. That's a great shot. I like the cig in one hand and plastic bag in the other. I don't have a photo of my dad and I together. I can barely call to mind what he looked like.

My Dad died 17 years ago. My blog was started, at least in part, to pay homage to what a good man he was. To help hold myself accountable to be at least half the human he was on this earth. The grief, and scars, do fade. But i still find myself thinking "what would Dad think about this?" or "what would he have said about that?" or "god damn, i wish he could see my fucking kids all grown up and awesome now! And meet my grand children..."

The best response i ever get when i tell stories about him is "Damn, I wish I could have met him." Well, i really wish i could have met your dad. Because he was a damn good human, and those are in short supply.

Kid - thanks my brother.

Exile- this phenomena occurs mostly in my inner workings, no worries about the impending holidays as they were always dominated by the Breadwinner's side, Turkey Day is spent in my own home with the boyos playing games and watching flicks... i also understand that my dad and i had a different relationship than a lot of fathers and sons, it's something i'm grateful for but i believe that the credit mainly goes to Pops for being the person that he was.

Daisy- Thanks Miss Daisy, and nice to see you ;) you'd dug Pops, after the divorce i think the old man learned that the ladies did dig him cuz he was cool like dat.

I often wonder how different a person I'd be if me and my Dad had been close -- or indeed, had any relaionship at all. He was an adult that shared the house, an arrangement I had no control over. I found my dad uninteresting and neither was he t intersted in me.

I missed Kirsty's Dad though. He was a loveable rogue, shyster, a chancer, who exploited the women in his life to get what he wanted. A hopeless father but a brilliant father-in-unmarried-law; and I get the wash of the waves of missing him too.

All the best kono. It's lovely to hear someone write so warmly about something you haven't experienced yourself - part of the deep purpose of writing. So not "futile" at all.