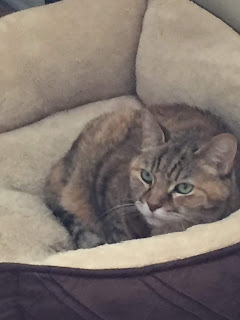 It's been a bit of a shit show around here lately but i'll get to that soon enough, what i need to get to now is this, my little cat, me beloved Claudia left this world on September 7th at the ripe old age of 19. She was what i called my most cattiest of cats, a skittish little imp who wasn't fond of many people but those she was fond of had a little companion whose little motor never stopped humming away. She hated when she had to move house/apt and would usually spend the next week hiding under a bed pissed off at the notion that we had the gall to move her from her last abode. When her younger brother Zuko arrived she decided that she would live in a bedroom and not leave hence necessitating the relocation of a litter box and food and water. It's why i love cats so much, they do not believe they are your pets but that you are theirs and you will do what they ask... or suffer the consequences. When she took up residence in said bedroom she spent nights sleeping next to my head and i'd often fall asleep to the sound of her purring happily away in her cozy little spot tucked between pillows and a headboard.

And so over the last year as i watched her decline it was tough. Her descent into very old kitty age saw her develop what i called "kitty dementia", albeit mildly, or maybe she decided she was to old for this living in one room shit and she decided to come out. She had lost her hearing and had some eyesight problems related to some other health issues but until the end she was the sweetest little cat i could have asked for, she still loved her head to be scratched and like pushing her face through a little circle i'd make with my hands, the same things she had done since i got her at five weeks old. Having moved to a stiff couch for my back she no longer slept next to my head but each morning she'd come slowly down the steps and meow a few times letting me know she was ready for her morning milk. She had always loved her milk and over the last year i gave it to her multiple times a day, i wanted her to be happy and nothing made her happier than a bit of milk and a kitty treat, once again her little motor going as she watched what i could only guess was my blurry figure with her failing eyes. I nicknamed her Little Butt when she was a kitten cuz she was such a tiny thing and it was a name that stuck until the end.

That Friday morning things went south fast and i knew she was in pain and so i grabbed the carrier and made for the emergency room. I won't go into the details but i knew it was the end. Somehow i figured that her being so old, having had a good life, and knowing she was in failing health would have made it easier but in reality i was lying to myself. And so a tall man with a small cat did his best to sputter out the words at the desk while he wiped the water from his eyes. After a brief exam the doc told me what i already knew and so they gave her a bit of pain medicine and brought her back to me so i could say goodbye. As i held her she laid her head on my shoulder and i talked to her as i always do with my cats, i'm a crazy cat person, i'll admit it freely, i told her how much i loved her and that when she got to Kitty Valhalla to tell her brothers Pablo and Louie and her sister Sylvia that their old man said hi and that he loves them. I sat there for a while scratching her head as she laid in my arms, told her how much i loved her and then it was time. I had her longer than any pet i had ever had, i drove home with more than an empty carrier, through the mist in my eyes i smiled at the thought that she had still gotten her last bit of milk and a treat that morning. Each morning i find myself still waiting to hear her call for milk, keep looking for her to be sitting in the kitchen and purring away. She was the last of the original three, i'm happy i got to be her human. 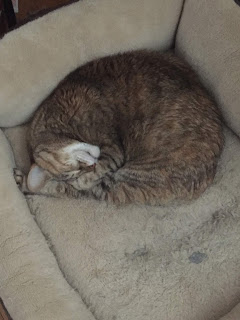 That's rough trade. Sorry to hear. Claudia is an *excellent* name for a cat. All cats should have people names. Most of them are more human than some people I've met.

I really didn't expect to feel so much emotion for a cat I've never met, but damn it, you got me with this one.

Sorry you lost your companion.

My cat Violet died last month too. I completely understand the attachment. They are the most lovable creatures and Violet was in every way a part of our family. I miss her a lot. Christmas Day will have a Violet-shaped gap in it this year. She always knocked the artificial tree over at some point. It was almost a ritual without which Christmas wasn't complete.

(P.S. I lost my computer recently and have only just got a new one.)

catching up, and i'm so sorry you had to say goodbye to her. it is always awful. makes us wonder why we do it. you were the only human she'd known her entire life, and you made sure she knew she was loved to the very last moment. that's all we can do for them...