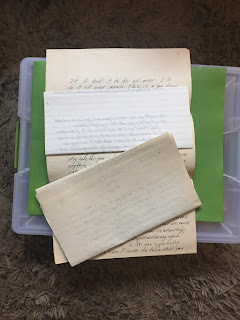 My father's handwriting is neat and clean, it's what the cultured man would call elegant, you see he grew up in an age where they taught penmanship, the boyos are growing up in age where they teach keyboarding and i grew up in an age caught somewhere in the middle. I've been living out of a suitcase for the past month, going back and forth to Cleveland to help get the old man settled in his new place and charged with the task of cleaning out his old one. My father wasn't exactly thrilled about giving up one iota of his autonomy but the situation dictated he must.  His old West Side apartment was falling apart with a landlord who had become to busy to do anything other than pick up the rent, the rotting wooden front steps, the tricky steps into the basement, they were not what a 70-something year old guy coming off major surgery needed to navigate (or his kids worry about his navigating) and so my big sis got to work and found him a place and i got to work cleaning out the old gaff.

If there was a glass half full side to this situation it's that i've gotten to spend more time in my hometown than i've spent in over 25 years, my last real stretch in Cleveland being the summer of 1990 and my job at Hill's Department Store. I spent most of my time at that gig getting stoned before, during, and after work all while attempting to woo the girl in the fabric department to sleep with me, (and yes she did, just in case you were wondering and there's a story behind that as well).  There was a strange symmetry that i had now become the main occupant of my dad's old place for 3 or 4 days every week, like him i spent all of my time alone, the drone of the television, the clank and pop of the furnace, in the morning's i'd walk to the restaurant at the corner or drive to the Circle K for coffee.  Then i'd get to work.

I have the funny feeling that old accountants save every fucking financial statement they ever get their hands on.  I can't be positive but i know this one did, of course he spent the last 20 odd years working the graveyard shift unloading trucks and stocking shelves.  He did taxes for a decade or so and spent his spare time investing and reading the financial section of the newspaper and various other publications. Needless to say there was a lot of shit to sift through, sort, determine if it was needed, decide if it should be shredded, it was probably a task for three people...

It was in a box in the tiny back bedroom, the bedroom with the broken bed that wasn't used, the one i used to stay in years ago when i'd breeze into town long before the boyos were around, when i was stomping through the wilderness, they were letters, handwritten in ink in my father's handwriting, a letter to my maternal grandmother and a couple written to his ex-wife, my mother. For the scholars who will study this refer back to the Late Night Maudlin Street posts (yes that's a fucking joke), they might need revised, for the rest of us i'll continue. There was a moment when i examined them that i wasn't sure what they were. Then it struck me and i wondered if i should read them? Did i really want to know? That divorce was rough on everyone but it was particularly tough on him, i did my best to help him get through it, i remember the night i found him sleeping in the basement, on his office floor, it was the last night i ever spent in my old bedroom, i went down and told him he needed to take my room, of course he protested but i said there's no fucking way he was gonna sleep on the basement floor of the house he fucking paid for and that if he did i would too. He smiled and went up the steps and into his new room. My mother wasn't home. She was out fucking her new boyfriend. I didn't know it then but i know it now. I'm sure my dad felt like he'd been kicked in the teeth and then the gut for good measure.

The letters were a tough read. There have been certain subjects in my life that i've always wanted answers to and these elegantly handwritten letters gave me some of what i needed.  I understood that it was only one side but there were things cited in them, specific examples of things said.  My mother possessed a level of cruelty and vindictiveness that i had not been aware of, she went right after him, insulted and belittled his manhood. My father came of age when a man's job was what defined him, she went right at the jugular, at his losing his job (in the great middle management purge of the early 90's), at his sexual prowess, if the man had a weakness it's that he loved her too much.  He admitted as much, laid out how the one who cares the least holds the power and how he was powerless when it came to her. How she wielded her love and approval like a hatchet, her ability to cut him down whenever she wished, how she used it to control those around her. He wrote the letters two years after the divorce, around the time of what would have been their 30th anniversary, he spoke of how even now, all this time later, he still felt like an unsure and nervous 17yr old kid, the age he was when he first met her, and how he would get a lump in his throat and his heart would race and he'd try and affect an air of coolness.  He laid out that he understood she got married because she was pregnant, a fact he was not privy to until three weeks after the ceremony, he understood that this fact weighed heavily on her decision to marry a man she said she never really loved. And even when he tried to get a dig in, to counter punch, he couldn't, three years after she left him and he still loved her too much.  Who wouldn't have a hard time picking themselves up off the mat with those kinds of shots thrown?

The letter to his ex mother in law, written to her for some closure, expressed his anger over how my mother's family basically disowned his children and how my grandmother in particular disowned her grandchildren. How my mother had placed the blame for the fractured relationships she had with her children on us, my sister and i, how she manipulated the situation and played the victim. It talked of her own admission of being a brilliant actress, how she laughed about it and used her ability to work people over. I know it hurt my sister, whose wedding went from being a celebration to a day at the courthouse. I, of course, had been my mother's prize, stated as much in the letters, the son she and her father had always wanted, i was well aware of my familial status and place and used my power with the same cruel and cutting precision she had against my father in the few words i would direct her way, the rest of the time was icy silence if i bothered to even see her at all. It was a lot to digest, even all these years later and it was all i could do to stifle the old anger that i could feel slowly beginning to burn.

The letters provide an excellent rationale for not getting close to anyone. See what it gets you?

Just imagine...there are stories like this in every one of those worn West Side houses.

the way you've been writing about all this tells me two things, at least: your compassion. I won't despoil it with an inadequate adjective. and secondly, you've been preparing a long time to understand this. the first thing has everything to do with the outcome of the second. rationale will only get you so far.

independent of the real - or because of it, this is magical writing. you've made the way to the heavy present and dark past lit up and tangible, like a photograph. I've never been in that apartment, but I'm there.

in part, because you got some answers - but like any answers worth their salt, it brings on more questions.

found the diary my mother kept when she met my dad. she was dating 3 other men, one for meals, one for love, and my dad - because he had a car. the diary stops around the time she found out she was pregnant with my sister.

mom was already gone when i read this. your dad is right there. knowing what he went through, even if you don't tell him you read the letters, will affect how you feel hanging out with him now. Who knows... he may start the conversation.

Did he have a good life? He got you. He got your sister. And i bet the boyos love their Grampa.

There's stuff here, mister, that is so personal to you and yet, is speaking to my own life with my now gone (divorced) parents. I'm lost. xo

Exile- we buy the ticket, we take the ride, heartbreak and pain are just part of it, an important part of it, without them a life would be incomplete. And you're right, there are stories like that in ever one of those West Side houses, i hope more get told...

Kid- you still got an email coming... and you know me, i don't know what i'm doing, i'm just trying to make sense of the senseless...

Daisy and Savannah- this is my therapy and my art, if i can elicit that much emotion i take it as compliment, thank you both for taking the time to read this stuff.