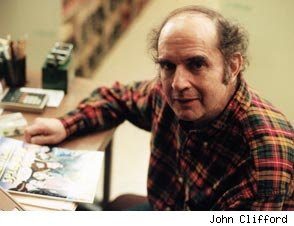 First and foremost he was a writer, maybe it was in little balloons above shit that other people drew but that's what he was a writer, a writer from Cleveland... Cleveland Heights to be exact, east side of town, i was born on the west side of town about 30 years later, i was 6 when the first American Splendor appeared and i'd be lying if i said i'd read it when it came out, Harvey wrote about his life, an ordinary life that was more interesting and alive than the lives of the so called rich and famous, the beautiful and glamorous and maybe what made it so interesting and alive was that we could relate to it, relate to the shit jobs and the bad relationships and we could laugh and see ourselves in his writing, a writer who was self-educated for the most part, a guy who created in spite of the shit society that we live in that rewards the talentless for making movies or dunking basketballs but fucking art? man good luck with that fucking gig, but he kept at it and did his thing and got a little recognition along the way, a few lucky breaks bouncing his way and in the end he got to be 70 years old and on his third marriage and battled cancer and depression and all kinds of other shit and helped us guys on the outside looking in to understand that sometimes you just do shit to do it, you'll never know if you don't try now will you? So thank you Harvey, thanks for the inspiration and the words and the dark humor and thanks for representing my fucking hometown which usually takes a beating from the rest of the country, a city that's been down and out so long we make Detroit look good, i was really hoping to get back to some new shit today but then i saw that this man died and i just kinda lost my train of thought, a bummer really, but in the end it might be the best thing for the poor guy and his what seemed even poorer health. American Splendor, you're god damn right.
Dreamt by Kono at 5:34 PM

When I read the news I thought you'd do a post about hum. Nicely put Kono

Guess that's another one to add to my list. Book, that is.

ditto nursemyra (when i read about his death the other day...)

Hey! I just got here via Mapstew. I grew up in Brook Park near Hopkins Airport. A lovely neighborhood! Escaped to Manhattan and am now tormented in New Jersey. Where did you live? I had relatives all over the place. Parma, especially.

And by the way, I'm old enough to have read this stuff when it first came out. My friends and I thought we were the only ones who were reading it!

Nursie & Twin- am i that predictable?

Dolce- it's what the kids call a graphic novel and i call a comic book but still well worth checking out.

UB- i grew up on a side street near Ridge and Pleasant Valley, my old man lives off W140th which is pretty close to Brook Park Rd., a place i frequented growing up by hanging out in the old Pinky's and Juicy Lucy's. and welcome to the lounge.