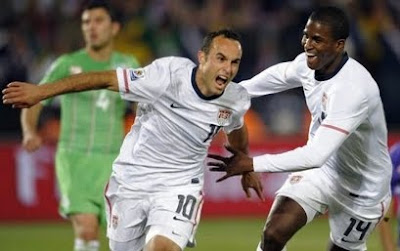 I almost had a nervous fucking breakdown, did my best to lay off the shots but then Clint Dempsey hit the post and i summoned the bartender and i've watched enough futbol to know that this was gonna be a giant kick in the ass, disallowed good goal, Altidore blows a sitter, hit the post, all the fucking signs, i broke all my rules of watching the game, went outside for a smoke which i never do during the game, took a piss which i never do during the game, all in the hope of breaking the cycle, that ridiculous fan hope of somehow by doing something different a few continents away the outcome will change, i stood at the urinal repeating "you gotta believe" like some zen fucking mantra and then i sat in a packed pub and watched Tim Howard throw a perfect outlet pass to Landon who put Jozy in space who found Deuce who slapped the ball into the keeper who fumbled it and for a few seconds time stopped and a white flash streaked into the screen and slotted the ball home.... fucking elation-relief-joy, unbridled fucking happiness as the place erupted and strangers hugged strangers, shit, i love the futbol and i have Gulfboot to thank for that, i hadn't been this high on sports since i was 9 years old and Al Michaels cried "do you believe in miracles? yes!" ... and now i get to do it all over again tomorrow.
Dreamt by Kono at 6:38 PM

I missed all but 3 mins @ 117 of today's game. The V-man had a swim meet. My kid following in his folk's footsteps & kickin ass in the pool is just as exciting. :)

It's always better to watch the progeny kick ass in the pool, besides it's most likely much easier on the liver and lungs, though maybe not on the nerves of Proud Mama.