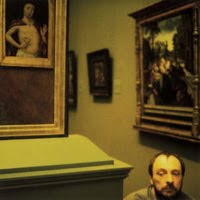 He died on X-mas day, apparently a suicide, Mr. Chesnutt had been milling around the periphery of my life for some time his songs floating in and out, heard on late night radio from college stations, it was the Kid that gave me some of his music and started a deeper appreciation for the man, an artist, in a wheelchair since he was 18 due to a car crash, re-learned how to play his guitar with gnarled hands, a victim in a sense of America, see in America we don't give a fuck about art and Vic Chesnutt couldn't get insurance and spent probably endless hours fighting for his right to live until he just couldn't put up with it anymore, until the mental and physical pain took it's toll and that was it... funny how in the richest country in the world some of us are denied the right of life, liberty and the pursuit of happiness, the powers that be don't want us creating and thinking, they want us consuming and passively watching, so that if you choose to write, paint, make music you better have a gig on the side that gives you one of those little cards that lets you go to the hospital and the doctor and receive medication without having to sell body parts in order to pay for it. This is a website to donate to his family set up by Kristen Hersh.... Kristenhersh.cashmusic.org/vic/ or you could buy some of the man's music and hear how brilliant he was, how much humanity he had, how he could convey what might be called the human condition so well in his songs. The tragedy is it didn't have to end this way, the tragedy is that while the bible thumpers all worry about the unborn they don't give a fuck about the living. Thank you Vic Chesnutt for sharing your brilliance.
Dreamt by Kono at 8:01 AM

sad story, but thanks for the lead. spent the past half hour listening to clips, and reading about him... will order a cd or two. there is no fairness...

He was absolutely brilliant. I can't remember the name of the song, but he wrote one that was essentially his break up song with death. I tend to agree with you that, sometimes, the circumstances we're in make it hard for some of us to stay out of that relationship.
Thanks for the tip about the donations site.