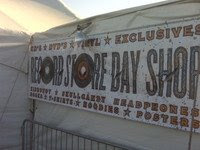 Go to your favorite local record store and buy something today, usually i'm not about consumerism and the like but Record Store day is different, independent music stores are the places where you can get the important and vital music being made today without giving money to some big box conglomerate monster, it's the place where local musicians work and a place where you can actually discuss music with a knowledgeable staff who give a shit instead of some asswipe in a blue polo shirt who only works in the music dept. cuz he didn't know shit about computers and i personally recommend you buy something on vinyl, that's right a real record and not a cd, even if you don't have a record player go buy a 7 inch single and admire the cover and the record inside, due to space constraints in my gaff my record player is on loan but i still plan on picking up some vinyl, possibly the Smiths 7" never before released in America or Jane's Addiction's Ritual on 180 gram vinyl, for those who don't know 180 gram is a nice slab of vinyl that will last a lifetime, or maybe a live My Morning Jacket album on limited release made available just for record store day. In the quaint hamlet of Pittsburgh the best record store is Paul's on Liberty ave., i'll be there later today to plunk down some hard earned dough, so get out of the house and go Independent record and book stores are a dying breed and i don't feel like being force fed shit from the mass culture meat grinder that is pop music and the best seller list brought to you buy the six or so major entertainment conglomerates, so get out there and support independent everything: music, art, books, record labels, publishers and stores.
Dreamt by Kono at 6:08 AM

this is a damn fine idea. Gem City Records is the last independent in my little burg... may not make it today, but tomorrow is a good shot. Will hit an independent book store along the way. i'm a slug, and use digital downloads/online bookstores way too much...