Margrave and the Monkey's favorite records 2007 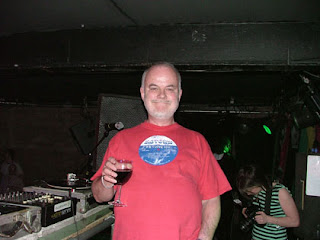 I'm not big on lists and such but seeing as it is the year end and I'm a fucking tastemaker like that Diablo Cody chick except i didn't take off my clothes on my blog in order parlay said blog into, you know, like bigger things here's a few of me favorite records from the past 365 days or so... in no particular order...
Joy Division re-issues, so what if they're old they still kick ass and the live discs are excellent for those of us who like to get stoned and ponder the musical growth of the band.
Dinosaur Jr., Beyond, sounds like 1988 all over again, since i've been listening to this band for 20 odd years or so this through the peaks and valleys, break-ups and reunions, this album took me back to high school and provided much needed rocking out music, fuck Clapton-J. Mascis is god.
The National- Boxer, brilliant fucking lyrics and good tunes, it's my grown-up album of the year, reminds me that i'm getting older and more mature but reassures me that i'm really still just an adolescent running around worried about girls and struggling through hangovers.
Okkervil River- The Stage Names, another album full of great lyrics and strong tunes, the pre-req. indie rock John Berryman tune, another album that reminds us that some of us hip kids are now approaching 40 and wondering what it means to grow up as we pile in the van with the band, score pot, get laid, ponder the universe and art and life in general.
The Good, the Bad and the Queen- s/t, any band with Paul Simonon gets my vote, the man can flat out dress, doesn't hurt that the songs kick ass, Damon Albarn always has some interesting tricks and i'm a bit of an Anglophile.
Shocking Pinks- s/t, apparently these songs are pulled from a couple of different albums by this guy from New Zealand, when i listen to it i think i should be driving to Molly Ringwald's house in Pretty in Pink and going to dark clubs where people have spiked, dyed hair and hip shoes.
The Hold Steady- Boys and Girls in America, good old rock and roll and i swear Craig Finn has raided my head for some lyrics and story lines and a tune about Berryman.
Honourable Mention: A Place to Bury Strangers, Kevin Drew, Robert Pollard, Bright Eyes, Wilco, Ryan Adams, Modest Mouse, Arcade Fire, PeterBjorn and John, Band of Horses and a bunch of shit i'm probably forgetting.
Need to get the Fall's last album to properly honour Mr. Peel and do justice by his favorite band so if anyone has it please send it my way.
Dreamt by Kono at 5:38 PM