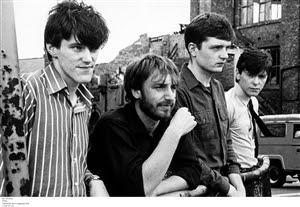 You know how the story ends, but it's always interesting to wonder about those last moments, particularly when one commits an act with such finality, it still comes down to speculation because no one will ever really know what went through Ian Kevin Curtis's mind the morning of May 18, 1980, the only thing we know is epilepsy, fame, love, took there toll, feel it closing in-feel it closing in-dayindayoutdayindayoutdayindayoutdayindout- come winter the rust belt of one country resembles the rust belt of another, on a rainy sunday i had a Carlsberg and watched the story of his life and of a band the has influenced me and entertained me, the movie was fucking good even if i did know what was going to happen and all the other major points it touched on, still i think that's the highest recommendation i can give, even though i knew the story and the outcome it was still riveting, so go see it... besides the music kicks ass too.
Dreamt by Kono at 5:12 PM