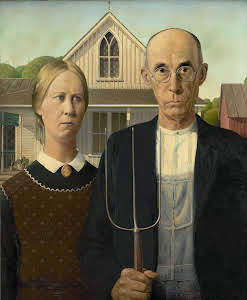 The first half dozen or so times i saw Ayn she roundly ignored me, no neighborly wave or hello or whatnot, and really what the fuck did i care. Bubba had trotted over the first time we were both outside to introduce himself and it wasn't until one day when they were both standing in their yard that Bubba introduced me formally to Ayn. We had a brief conversation about the houses that were up for sale, about one across the street that had been bought by a couple from California only for things to go south for said couple and it now being bought and sold again. I mentioned how it was unfortunate and i believed the man who lived there had sorta lost his shit. I don't know what happened other than his wife took the two small children and left and for a couple weeks the guy wandered around the neighborhood with his dog stoned and drunk. It seemed he had the old psychotic break, this life shit taking it's toll and he was asking anyone and everyone to come over and party though in the year or two he had lived here we had barely seen him. In fact on the day the police showed up after a neighbor complained about his dog i stopped and talked to one of the cops. I asked what was up and he told me and i explained that though i didn't know the guy i was worried about him, that he seemed to have snapped and that i think he needed some help. The cop listened and said they had contacted his family, his father, but unfortunately they could do nothing until he did something unless he voluntarily checked himself in. That's the law. And soon after the house was empty.

As i explained the situation to Bubba and Ayn their comments spoke volumes. Bubba muttered something about the guy being on "dope" and Ayn said "it sounds like he was on the cocaine." The cocaine? i was going to ask Ayn if she meant blow, flake, Ricky, nose candy, Bolivian marching powder but i thought that might be too far over her head. They were squares. The textbook definition of squares and though i have no problem with squares i do have problem with righteous squares, those who feel some sort of moral superiority due to their squareness. I gently stated it was more a mental breakdown and quickly made my exit. I knew already that i wanted to keep contact with these people to a minimum. The only thing we had in common was a zip code. Their son/daughter/grandkid, lived across the main road that divided our community from that one, one decidedly more "square" where the Shitgibbon signs outnumbered the non-fascist signs and Support the Police yard signs were common. It has lower real estate and school taxes and i couldn't help but wonder why Bubba and Ayn didn't move there as there are just as many places up for sale of the same type and style of house they bought and probably for a lot less money and definitely less taxes. People move to my burb almost exclusively for the schools, in fact it's considered a transient community because many times once the kids are grown and out of the house the parents end up moving to a place with lower real estate and school taxes (while making a nice profit on their gaff.)

From the get go i could tell that Bubba and Ayn were busybodies as they got to work gutting the backyard and their house which is odd due to the price they paid and the fact it wasn't in bad shape at all. Granted everyone can do what they want with their own place so what do i care? Except of course is you're gonna talk shit but we'll get to that. Ayn spent endless hours puttering around the yard ripping out shrubs and trees and flowers only to plant different shrubs and flowers. Okay, though i wouldn't have ripped out the tree that my old neighbors were thrilled with finally bearing fruit. Ayn took down all the bird feeders and one could definitely tell she disliked animals. I on the other hand am down with my furry friends domesticated or otherwise. Hell I'd love to get a goat or two for my yard and i'd never have to mow the lawn again. Besides goats are fucking cool, (even if one did bite Disaster's hand on accident). There are bird feeders behind my house, there are chipmunks and squirrels and deer and raccon, there is Fred the Groundhog and his groundhog friends. I often chuck old fruit into the woods behind my house for the animals to grub on, it's my way of saying we're all one here, all part of the same system and trying to coexist as peacefully as possible. Bubba would probably say i'm on the "dope"... and he'd be right.

Now let me state that i have no problem with people being into their landscaping and horticulture. Hell i'm into growing vegetables in the summer and the day it goes legal i'll be tending some fucking ganja plants as if they were my own children, but mainly i grow shit because i like to and i just dig plants. It's not for show or so i can get my yard in Better Homes and Gardens, in fact my yard is a work in progress but i'm not all that big on yard work other than to maintain. Yard work is the Breadwinner's domain and recently the I-mac has taken an interest in it because he likes the physicality of it and the fact he gets paid. Ayn and Bubba on the other hand have sunk at least 50k into their yard. A project that involved backhoes and front loaders and all sorts of shit. Add in the work they're doing inside and you can add what i'm guessing is another 50k at least. Which is cool, do as you please but don't run your fucking mouth dig? And what brings this on? Well...

I was having a conversation with my other neighbor, the one who moved from Budapest, and she was laughing as she told me she had been given the grand tour of the backyard and that while it was taking place Ayn had told her that "she really didn't like me." I of course laughed and said excellent! i may start pitching empty beer cans into my backyard just to be a prick, which had my nice neighbor in stitches. It struck me as funny as someone who had just moved into a neighborhood would start talking shit but then again Ayn seems like a good old snobby ass and i wanted to state that having been paying on this place for the last 11 years i don't really give a fuck what she thinks, in fact i'm sure they looked at their place before they moved in and saw the houses around them and if they didn't like the way mine looked they could have easily bought a different house... maybe one they didn't have to gut but i have the feeling no matter where they moved shit was getting gutted and trampled. Needless to say it's good to have the intel on the cul de sac... since busting the dipshit stealing packages i've been looked at as some kind of hero/caretaker here at the end of my street, not that i do anything or asked for that job, most of my neighbors know i'm an easygoing guy who may be a bit out of the "mainstream" and who may be honest to a fault. To each his own i say and i don't really care what other people fucking think, i don't have time to worry about that shit, there's more important things. That being said let me just state my yard does not look like some overgrown vacant lot, in fact it looks just fine and not out of the norm with most of the houses... except those where there is a landscaping fetish, which is great if that's what you're all about.

Of course i could explain to Ayn that i have two sons who are active and involved with shit and that i'm constantly running around so yes, making sure my yard is picturesque is not high on my list of priorities. If the fucking grass is cut and the weeds are not out of control i'm cool. I mentioned this to the Breadwinner who i knew would be incensed by said comment and sat back and got a good chuckle our of her diatribe, though i did enjoy when she asked, "did she say us or just YOU?" To which i replied i believe just me, with a big smile. When Ayn first met the BW she was delighted and smiling and asked if "she was the lady of the house?" and went on and on. The BW was even surprised by this friendly outburst and i said i really do believe it's me she finds offensive for some reason which i must admit pleases me, if my mere presence can cause the squares consternation i must be doing something right. I get the feeling old Ayn thinks i'm some sort of goldbricker, lounging around in my underwear watching Sportscenter and scratching my nuts while i send "the lady of the house" off to work so that i can bask in this leisurely lifestyle. Little does Ayn know i'm a fucking indentured servant who spends most of his day working, cooking, cleaning, driving and whatever else may come up while the "lady of the house" works her 4 or 5 hours before coming home for an afternoon nap.

So now the real fun starts... i'm half tempted to have some of the crew come over to sit in the backyard blasting dub, drinking, and burning spliffs... and since we almost all have medical cards there's not much the Five-O can do other than to ask us to go inside (that is if Ayn and Bubba called)  but more than likely i'll do jack shit... other than keep any sort of communication to the bare minimum. Just the other day Nick Disaster said hi to Ayn while she was out watering the shrubs and got roundly ignored. I've instructed the boyos not to go out of their way to say hi unless Ayn and Bubba say it first, to be polite and that's it. I told them i'd be doing much the same as i don't really feel the need to be all that warm and neighborly at this point. I could tell that from the start with Ayn's icy demeanor but what poor Ayn didn't know is i'm most proficient in the iciness department. Now when i'm out working in the yard or the garage i just pretend they're not there, no need for conversation, no need for anything really. Add in the fact that Bubba and Ayn seemed to have annoyed the neighbor on the other side of them (with a sign stating keep off the new grass) and i don't think anyone is all that excited about the new neighbors... the trials and tribulations of the burbs... yeah, sometimes i really miss the city.