We were quiet as we sat in the cab. Veronica had taken hold of my hand and i studied her as she took it all in as we drove through the streets, the same route i had taken to pick her up only five short days ago, five days the felt like a lifetime ago and yet passed in the blink of an eye. 120 or so hours. It sounds like a small number. It is a small number but it can be misleading, how much living can one cram into 120 hours. A lot if you try. And so with the sun shining down on us we were going home... like the minister says, for better or for worse.
At the airport we checked in and talked to the woman at the counter about getting our seats together. Having bought the tickets separately we had been placed rows apart and the last thing we wanted was to fly home "alone". Since i had a prime aisle seat the counter lady felt it wouldn't be difficult to switch with someone especially considering Veronica was in the very last row, the one with two seats and near the shitters, not the most ideal seat for a transatlantic flight but the upside was it did have a bit more room. I could see her look of worry because she wanted to spend the last part of this adventure with me. I told her not to fret as we'd get it sorted once we were onboard.
As we sat killing time we talked and did a dance around the inevitable subject of what would happen when we got back. She was sitting on the floor when she looked at me and said she wanted to get me something, i smiled and stated there was no need for that because she had already given me more than she could ever really imagine. Veronica insisted though and then sheepishly said, but i don't have any money and it's kind of strange for me to ask and then buy you something with your own money. I laughed, i believe that's called a relationship and handed her a few twenty pound notes. She kissed me and disappeared towards the shops.
Sitting in the concourse i was alone for the first time in a week. I took a deep breath and tried to sort out a plan of action. There was a very real possibility that she would walk away from this... and what could i say? We had never spoke of what would happen other than her stating that while we were off our own continent we were together, a couple, but that when we got back we could not be. Of course the option on returning was to make myself available but that was a complicated situation. If there was one thing in my life i was devoted to at this point it was the business, the game, the running of my own little empire in my corner of the city. Nothing was going to fuck that up and yet here i was knowing full well that my little escapade here could easily fuck that up. It wasn't that i believed either woman involved in my own personal triad would do something to put the screws to me but then again we all know the fury of a woman scorned let alone the possibility of two women scorned. The fact was, in my mind, that i had worked my ass off to be in this position and with the money spigot turned on and the sale of gear increasing almost weekly who knew how much i could rake in. I was supremely confident in my ability to handle whatever was thrown at me but we don't need a crash course in Greek mythology to understand that every hero or anti-hero in my case, has his fatal flaw. Mine may have been a predilection for beautiful brunettes.
I was lost in thought when Veronica came walking back towards me with a lovely little grin. She handed me the change and then lamented that there wasn't much to choose from and how she was trying to figure out what would suit me best. Demurely, she handed me the bag. I opened it up and what should i see? The most lovely pair of socks i could have ever hoped for. Socks you say? Yes socks. She had nailed it, they were colorful and striped and suited me perfectly. Oddly i had this thing for weird or colorful socks, much like my thing for knit winter caps , she said that when she saw this pair they just sort of fit me... and she was right. Yes she could have bought me a fucking snow globe and i'd have thought it was the cat's ass but this was something else, she knew me, almost intuitively, it was almost frightening how much so, and there was a part of me that knew how dangerous she was, how infatuated i had become with her. I kissed her as we stood there in the middle of Gatwick airport and said i had never gotten a better gift in my life, that these socks were brilliant. Her sparkling eyes and gorgeous smile radiating the most celestial of light at me. I was fucked. The hard man was in love. 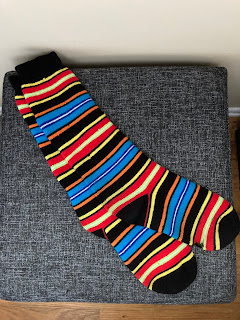 We boarded the plane and had a brief word with the flight attendant about sitting together. Veronica took her seat in the last row and i somewhere in the middle. It took only a minute for Veronica to charm the guy next to her, who for his part probably thought he had lucked out sitting next to a beautiful woman, to switch seats with me. Of course it probably helped that the guy she pointed out who wanted to sit next to her practically hit his head on the ceiling of the cabin when he stood up. Seats sorted i grabbed my things and made my way back towards her, thanked the kind gentleman for switching, and settled in for the long flight home. While i had dreams of joining the Mile High Club i also knew that the poor girl still needed a break and so we sat there and gazed out the window. Looked out over the island known as Ireland and then at nothing but a vast expanse of blue. We were on the last leg of a trip, an intense and passionate adventure that had left us both reeling from the beauty of it. Now it was back to reality, to the grind of everyday life, the fantasy we had created for this brief time was dissipating like so much London fog in the noonday sun.
As we flew over the Atlantic Veronica curled up and put her head on my shoulder. She drifted off to sleep as i sat perfectly still and listened to her breath, felt her warm body next to mine, the roar of the engines filling my ears along with the roar of reality that would crystalize as soon as the wheels touched down. Each passing minute brought us closer to that. I tried to close my eyes but couldn't, sleep was not going to happen and so instead i sat and there and let Veronica use me as her pillow. When she woke up she smiled and snuggled closer to me. She didn't say a word, just held on to me as if i might slip away, as if i may have been a mirage, a dream she had that was so vivid and real she thought it was true. It was a sunny afternoon when the tires hit the tarmac. The England Adventure was officially over.