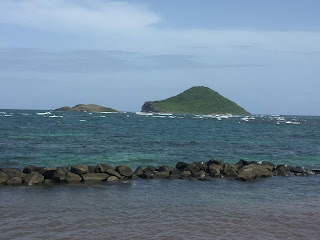 When i dwell on these little rocks tossed into the large sea i am a bit lost in the meaninglessness, the joy and beauty. This year the little rock was a place called St. Lucia, an island in the eastern Caribbean sitting on the border between the Atlantic Ocean and the Caribbean Sea. An absolutely gorgeous place with a rain forest so dense that there are barely an inhabitants in the center of the island, everyone and everything settled around the rim. We stayed at the southernmost point, where if i stood and looked to my left (east) there was the Atlantic and if i turned my head to the right (west) there was the Caribbean. There was an absolute lovely wind that never seemed to stop blowing which provided a template for some of the most gorgeous clouds i'd ever seen, where the weather could go from hazy to sunny to a downpour and back to sunny in the course of an hour. Mystical was how i thought of it and i spent hours staring out to sea past the outcroppings of rock, listening to the wind and surf and generally just contemplating nothing more than the fleeting nature of each breath timed to the waves.

Within an hour of landing i had already scored my weed. I'm nothing if not diligent when it comes to preparation and procuring of my favorite plant. In fact i had not one but two sources, the bell hop, who would bring me some a few hours later and a fine chap who carved birdhouses out of coconuts named Shane. The brilliant thing about St. Lucia is all the beaches are public so even though some conglomerate can set up shop in the most prime place anyone can still use the beach. Hence there were a few guys selling necklaces and coconut birdhouses and Shane looked the most likely to have what i needed. We became pals and there was a young chap named Jaid who hung about offering tours and taxi service and over the course of the 9 days i was there i would score them beers or apples or waters if they needed them. I wasn't the only one mind you so over the course of the day they remained well hydrated and fed, i liked their style as it reminded me of my days as a migrant beach worker when you relied on the kindness of others to help you out. Needless to say Shane helped me out a few times over my stay and while it wasn't Jamaican quality it wasn't too bad either. Some of it was actually excellent and i attributed it to the fact that some was more properly harvested and cured and some it wasn't. 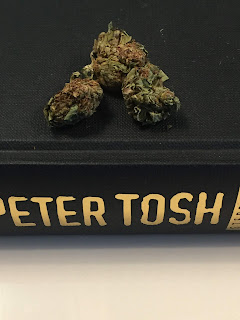 St. Lucians are a mellow and easy going type and the island as a whole has embraced tourism as their bread and butter. They want the Yanks and Brits and Canadians flocking to their little paradise because other than agriculture and fishing there isn't much in the way of industry on the island. Tourism is what drives the economy and everywhere you turn the Looshins are asking if you are enjoying the place and if you'll come back, if you'll tell your friends, thanking you for coming. Yes there are times when the neo-colonial guilt comes creeping in but for the most part you are helping this little island survive so their seems to be a balance. The little island was a pawn in the wars of Britain and France and changed hands numerous times and the influence of those countries can be seen everywhere. Most of the towns sit on the little inlets and bays that dot the coast and are beautiful places reminiscent of a more colorful New Orleans. The food is fucking fantastic but then again i'm biased. I've always been a fiend for jerk chicken and pork, chicken roti, fried plantains and peas (beans) and rice. Harley and Marveous, the jerk hut crew, also made some excellent smoked fish which changed daily depending on what was caught that morning, needless to say it was good stuff.

So what does one do on a volcanic little island in the eastern Caribbean? Well a lot really. The boyos got to see an active volcano and smell the glorious sulfur the earth spews out like one long noxious fart. It was then a short walk down the hill to the mud baths where we all jumped in and covered ourselves with volcanic mud while soaking in the warm black water. The driver, Danny aka Danny Boy, then drove us to a gorgeous waterfall where we washed off the rest of the mud and swam around in a the cool freshwater pouring over the cliff. Danny was a great guide and even better human, we had an interesting discussion about the current state of American politics and Danny and i were well in tune with our views of the events happening in the asylum located to the north. Danny found the old stoner's view on the environment and man's place in it an interesting point and claimed that i was a wise man who seemed to think deeply on the state of things, i smiled and told him that i don't really know a thing but am trying to do the least amount of damage while doing the most amount of good. Needless to say it was a fine day and after a busy morning we cut the afternoon short as it was an island holiday (of which we were unaware) and wanted Danny to get back home to enjoy the rest of the day with his wife and son.

There was a snorkel trip on a large catamaran where to boyos and i saw some rather large lobsters and the stray eel (at Oprah's favorite place apparently), a place called Sugar Beach. The whole trip along a coast that was some of the most gorgeous i've ever seen, outcroppings of volcanic rock and small mountains that seemed to be dropped right into the sea, the towns and villages dotting every inlet and bay with the bright colored roofs. The second stop was at a deeper spot and luckily Nick and the Breadwinner sat this one out. The current was challenging to say the least but all that swimming came in handy. The big problem was the invasion of tiny, translucent jellyfish which had everyone, including the I-mac, losing their shit. Of course the dumbest guy (see me) was attempting to swim in between and around them but the I-mac was having none of it and so we turned and headed back, me helping the boy get safely back on the boat in a current that was strong and moving the boat back and forth. I managed to only get stung twice and once on board realized that we were practically the last ones out of the water.

Most of the week was spent ambling along a beach and listening to the waves. There was a brilliant mento band that played one afternoon which was a highlight for this Jamaican music lover. Three older gentlemen playing acoustic guitar, a drum, and maracas, all while singing, they played one of my all time favorite songs, Shame and Scandal, and it was an hour well spent. There was Maurice, a tall waiter who struck up a conversation about the Trojan Records shirt i was wearing. We discussed a ton of music and of course the futbol. Maurice was a Chelsea fan, a fact i told him was most unfortunate as we had a good laugh. Of course the Trojan shirt was a bit of a laugh in itself. An older woman approached me and said she had never seen it so blatantly advertised, i gave her a puzzled look knowing full well she thought it was a condom t-shirt, i then explained to her the it was a record label from England specializing in Jamaican music. She was dumbfounded and smiled while telling me she had learned something today, i politely smiled back and told her she should look into it as there was some great music put out by this label.

There was the infamous goat incident, where a little goat i had dubbed Nick the goat, because of his trouble-making demeanor, took a nip at Nick Disaster. There was Rufus the stray dog who i would have taken home if i could have. There was a respite in the battle between the Breadwinner and i. I made it a point to make sure the trip went smoothly and did my best to hangout and listen and not wander off as i'm prone to do. Of course the ganja helps with that because the only place i really wandered off to would be the jerk hut followed by a lounge in the lazy river. It was a fine time indeed and i look forward to the day i can get back there again.
Dreamt by Kono at 6:31 AM

Brilliant, that sounds like a great trip -- in more senses than one. I would always trust you to navigate to the best weed within half an hour of being placed anywhere.

Wasn't that place wiped out in a hurricane? How does it look? I just returned from London. It's exhausting. I'd have preferred to sit on a beach in St. Lucia. First world problems.

Our kids are lucky to be exposed to this stuff so early in life. It's a long ways from Bagley Rd.