And so the countdown to lift-off began as my friend, his Ex, and i sat in some horrendous country themed bar across the street from the venue. The Blue Moons went down smooth and refreshing and we ordered some dinner and discussed the events that had just taken place. As if on cue, when the Ex had finished eating her new man texted and off she went, never to be seen again this night. To say i felt bad for my friend wouldn't do it justice, they've been on and off for over a decade, the usual scenario being she finds a new guy and splits and when it falls apart she calls him up, they remain friends and if she needs help he gives it. He is a decent and hard-working guy who is lonely as fuck. The product of a divorced home and a father who was both physically and emotionally abusive the psychic damage done is both great and extensive. We sat at the bar with our beers and he spewed a controlled vitriol. He told me to be nice when we met the guy (which we never did), talked about what a loser the guy was and how he couldn't hold a job and was an ex-con, repeated every third or fourth sentence that he wasn't bitter. His hurt was palpable and i just wanted to make sure he had a good night. I knew from years before that his father, who was a complete shitbag, judged everyone on the size of their wallet and make of their car. As he talked about his job and his pay i gently kept changing the subject. I knew why he did it... because their was nothing else for him to talk about, it was sad, so i did my best to make him forget. 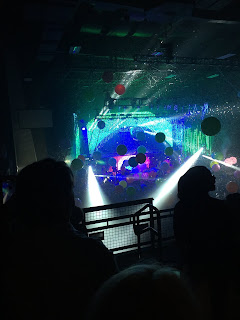 At 6:40pm i made my way to the bathroom and stood in a stall while dumping a healthy dose of  ground mushrooms into my hand, i wheeled around and made for my stool where i promptly tossed them into my mouth and quickly drank some water to wash them down. By 7:30 the tingle was in full effect and on what was now my third trip to the bathroom to pinch out a bit more i was giggling at how wonderful it felt to walk. It was then that i noticed that a gaggle of women had congregated around the mechanical bull and were attempting to ride the thing. I stared in wonderment at the absurd scene and asked my friend if it was really happening, he laughed and said, yep! you should go and try it, and i replied i'd be like Gene Wilder in Stir Crazy and ride the thing for 2 minutes, to which my friend replied, ride? you and the mechanical bull would fucking float off into the sky! As the clock struck 8 we paid our tab and made our way outdoors for public consumption of the cannabis pen and across the street and into the gig. 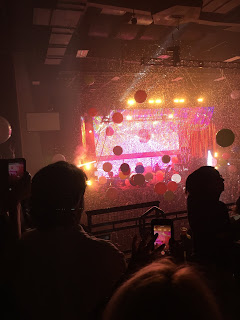 By now it was all systems go, i had given up the booze entirely and had switched to water, the dose was bigger than i planned, i grinned and stretched, every pain i had was gone, it felt as if i was vibrating a few inches off the ground, i ran into some other good friends and hooked one up with what was left of my stash. I bought my boy beers whenever he needed, it was the least i could do for him buying the ticket. We stood outside in the gorgeous night, partly so my friend could have a cigarette and so i could enjoy the night air. 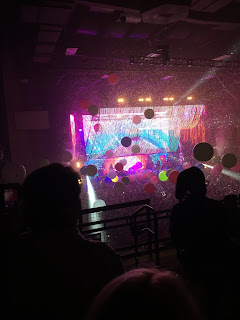 For some reason, women kept talking to me. My boy laughed and called me a dick cuz at one point i was having a conversation with a women in the beer line when another women walked up, pointed at my shirt and started talking too, she told me i should come to the upstairs bar with her because the line was shorter even though i was next (behind the other woman i was talking to), when she finally split i turned back to the other woman who was now buying some horrible light beer and joked about how she waited in line that long for a shit Bud Light, she told me the can had fooled her because she thought it was Guinness and proceeded to give me the business for drinking water. I told her i was a special case and bought her beer and smiled. Needless to it was a recurring theme and my friend was laughing his ass off and claiming that i could have went home with half a dozen phone numbers or better yet one of them. I explained that it was the mushroom effect and that it softens the eyes and the demeanor and certain people pick up on it not to mention the fact that i'm in such a blissful state of being that it didn't much matter, i was after nothing more than a friendly chat until the show kicked off but i did admit it didn't suck. 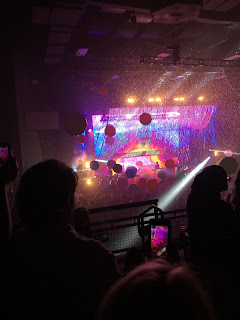 Then of course the show kicked off and oh what a show it was, the set list being a cherry-picked bit of Lips favorites with a sprinkling in of songs off the new record which adds up to a swell night of music. Add in one of the best fucking light shows you'll find these days and the senses were gleefully overloaded with light and music. There comes a beautiful sense of peace and lucidity when you take a big enough dose, it's a hard feeling to describe other than it's a wonderful place and when you add all the bits together it was a banner fucking evening. When the show was over i hugged my friend and thanked him for what was a great day. I turned down a ride from my other friends so i could walk the North Shore streets and take the train back to my car. I had turned the corner and was on the way back down to the terrestrial world. Besides, i love the damn train while the boomers kick their way through my system, i love the ride through Downtown and under the buildings, past Station Square and then through the budding barrio, i love that by the time i reach my stop the train is practically empty, the floodlights and platform reminding me of the places south of London seen many moons ago, i walked off the platform singing Race for the Prize while the crickets sang back up and the traffic sounded like water lapping on the shore.

(All those photos were taken during the first song, Race for the Prize, before i went downstairs and really overloaded the senses :)

i love that by the time i reach my stop the train is practically empty, the floodlights and platform reminding me of the places south of London seen many moons ago

The psychic damage done is both great and extensive and permanent. You left out that last one.

That show wouldn't have been half as satisfying if it had been in a larger venue.

I just bought a dozen old Scene Magazines from some horder. Issues from the 70's and 80's. Ads for Bowie at the Coliseum and The Pagans at Pirate's Cove. The Psychedelic Furs at The Phantasy in Lakewood and other delectable memories.

Well that makes me psychically damaged then :) LSD is extremely beneficial for all sorts of psychiatric disorders. In fact, I'm going to start using it soon myself in order to get a grip on my alcoholism, which is getting out of hand.

I loved these stories -- you convey the sheer joy and marvellousness of the world when one is on it.

But boy, did I feel for your friend with the hot and cold Ex. What an unkind way to treat a man.