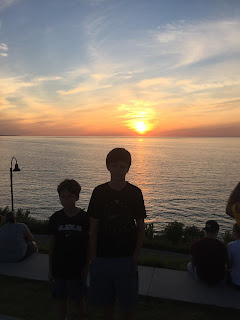 Had it gone according to plan i'd have been driving back from Cleveland right about now with the knowledge that this was probably the last Father's Day with my father. As it is i drove back Friday after attending his memorial celebration at Lakewood Park as a brilliant sun set over Lake Erie. The physical part of my father was now contained in a rosewood box, the other part is any one's guess. As i watched his siblings get up and speak, some ramble, some struggle to hold it together, it dawned on me that i was rather composed, that i guess i was doing what my old man had told me to do and to "get on with it." Part of this was because i had put a lot of thought into my father's death even before he was dead. He smoked and had for over 50 years, he worked the night shift for the last 20, he ate and lived like a bachelor which is man-speak for he did what the fuck he felt like doing, most of which probably wasn't the healthiest way to live. For a long time i lived with the knowledge that i was most likely going to get a phone call telling me of his sudden demise. Call it the fucking cancer silver lining, it gives you time, you just have to use it to the best of your ability however long that may be. The old man and i used it to the best of our abilities. That knowledge alone makes me smile now and then.


So what did i know about my father? Everything and nothing. As people spoke to me about him there were some consistent observations from various parties. He was extremely intelligent. His younger brother was in awe of the way my dad would rationally and slowly think through things, how he was capable of understanding complex subjects and maintaining his focus on said subjects while digesting vast amounts of information. I remember my father telling me his college adviser told him he should go into engineering. My dad thought he was too weak in math, (so he became an accountant, which i always told him cracked me up), the adviser told him that while he may have to work a bit harder in math he was more than capable and far and away stronger in English and had an ability to relate complex concepts in an understandable fashion. He was a smart fucking dude. I know i already miss our philosophical and political conversations that would run into hours, i know i kept thinking i needed to call him today and then remembered that i couldn't.

Today i got on with things. I woke up and made the boyos cinnamon buns and then cut the grass, i watched Mexico beat ze Germans 1-0, (i told my dad i was all in on Mexico since the US didn't make it, mainly to piss off the supporters of the Orange Shitgibbon, besides today they displayed the heart and talent that we lack, what's not the root for?) i swept floors and dusted and did laundry, i drove the boyos to various places, i traded texts with various relatives and friends wishing each other happy father's day. There was no rest or relaxation mainly because i didn't want any, the more occupied i could keep myself the better it was, because i realize it's the space in between that gets me, where the mind loosens up and lets down it's guard and i think about what i need to tell him and shake my head and wonder how many times that needs to happen before it finally stops or feels normal, doesn't make me take a deep breath to compose myself, it happens in the car or in the kitchen as i watch a groundhog eat leaves out my back door, it happens in the quiet of the night as i look in on the boyos, it happens mid-page in some book i'm reading where i wonder, what would the old man think of that?

There have been times over the last few days where i've talked to that rosewood box. I know Pops would get quite the chuckle out of it but he understood his son like few others have, he knows i talk for me, for comfort. I also know that today is the first of many firsts. It's alright, while i'm not quite the rational thinker Pops was i'm still his son and did inherit some of those traits, time doesn't stop, soon enough the boyos will be off into the world and i'll be that guy sitting in his chair reading his books and talking on the phone (or over a beer or cup of coffee) for hours to my sons, at least i hope that's how it'll turn out. There's some things i'll teach them, mostly what Pops taught me, that it's their life and they gotta live it, that you keep your word and try and be a decent human being, that sometimes you're gonna fail and that'll be okay so long as you pick yourself up off that mat and, you know, get on with things. Man do i miss that guy. 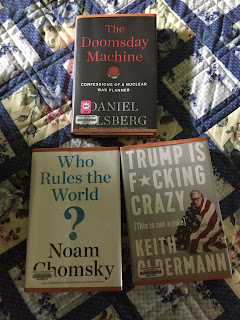 (What my dad was reading when he passed away)

Sunset over Lake Erie sounds like a Jim Jarmusch movie. It's not?

You are so, so lucky to have had a da like that. I'm jealous. But in the healthy way. Not the hateful way.

We went to the racetrack for Father's Day and bet on horses. I taught my 11-year old how to box a bet. Sports betting is recently legal in NJ and the track has a book. I put $10 on the Browns to win the Super Bowl at 75-1. I thought it'd be 300-1 but the tote said the team made some changes and money is coming in on them. We'll see.

You speak so beautifully and warmly about your Dad; it's a pleasure to read. "Getting on with it" -- are you sure you're not from Lancashire? :)

I wish you all the best kono. When my father-in-law (well, me and Kirsty were never married but YKWIM) died I was taken aback at the unpredicatability of how the grief affected me.

Those are lovely rememberances -- and a successful life in the ways beyond simply succeeding in a job.

Exile- I can honestly say that Lake Erie sunsets are the best ones i've seen, then again i'm sure you've seen a few. I know i'm one of the lucky ones too when it came to my dad, i've had many friends over the years tell me that they envied the relationship we had, and man do i miss the guy.

looby- Thank you sir, i guess most of what i was gonna say i put in Exile's comment, i find now that a little time has past it's almost tougher on me, seems it's the little things that get me and the fact that when the world gets weird i miss those conversations with him immensely. But as any Lancashire lad worth his salt would say, get on with it ;)

my deepest condolences... Good Energy to you & your loved ones. ❤️

twin- it's nice to see an old friend here in the lounge... and thanks.